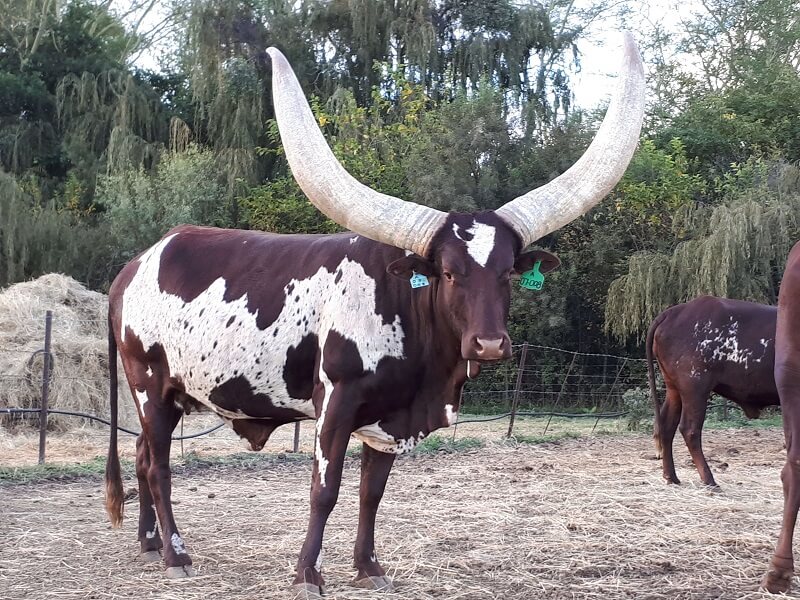 The South African record price for embryos sold was shattered on 4 September last year. Four embryos of the Ankole cattle breed were sold at the Stud Game Breeders auction for an astounding R102 500 each to Piet Potgieter and Philip Botha from Leliepan.

The long road to South Africa

Museveni offered to sell him some of the cattle, but the Department of Agriculture, Forestry and Fisheries prevented the importation, citing inadequate disease control measures in Uganda.

Determined to solve the problem, Ramaphosa began by enlisting the assistance of Dr Morné de la Rey, a reproductive veterinary specialist and director of Embryo Plus, who has been extensively involved in embryo transfer, such as the importation of embryos of Boran cattle.

He then purchased 40 Ankole cows and three bulls from Museveni and shipped them to Ol Pejeta in Kenya, where Embryo Plus runs an embryo quarantine station.

The cows were programmed, artificially inseminated, and the embryos flushed and sent to South Africa. Here they were transferred into recipient or surrogate cows, which were then quarantined for two months.

The breed has gained considerable traction since its official debut in South African markets in 2017 where the highest priced bull, Maximus, sold for R640 000 and highest priced cow, Kyasha, sold for R540 000.

The Ankole Cattle Breeders’ Society is one of the fastest growing breed societies and already has over 20 members. The South African Ankole national numbers amount to roughly 1 000 cattle.

The insatiable demand for Ankole in South Africa can be explained by key factors including, but not limited to, their unique and regal appearance, hardiness that allows them to be farmed anywhere, low veterinary and feed input, disease resistance, internal and external parasite resistance, ease of handling, heat tolerance, crossbreeding potential, and quality of milk and meat, to name a few.

These cattle are productive and have large frames and rich milk, with butter fat up to 10%. They also have quality meat high in polyunsaturated fats and omega 6 and 9 oils.

Their longevity is outstanding, with individuals living up to 30 years, and production is good (they produce over 25 calves under Ugandan conditions).

They leave a low carbon footprint, their impact on the environment is low and they can maintain themselves on very little nutrients and water. The animals have not only survived the harshest African conditions but have thrived.

The Ankole breed, with its diverse genetic variety of colours, horn shapes and versatility, attract an array of South African enthusiasts all over the country.

Apart from their obvious visual aesthetic and hardiness, this multi-purpose breed has the added angle of tourism potential and are already found at wedding venues, wine farms as well as game and cattle farms.

The Ugandan Wildlife Authority and other conservationists collected a number of herds of Ankole cattle and placed them in wildlife reserves, such as Lake Mburo National Park, for conservation purposes.

It is strongly believed that if they are conserved in national wildlife parks, it may be one of the last places they can be found in the near future.

Ankole cattle are similarly protected at the Big 5 Ol Pejeta Conservancy in Kenya. The animals are a major tourist attraction and rank top two with the last remaining Northern White Rhino as the most popular animal to see for tourists.

Whomever you are and wherever you choose to keep them, it is clear that the journey of Ankole cattle in South Africa has just begun, and those already involved are excited about their bright future. – Press release, Ankole Cattle Breeders’ Society of South Africa