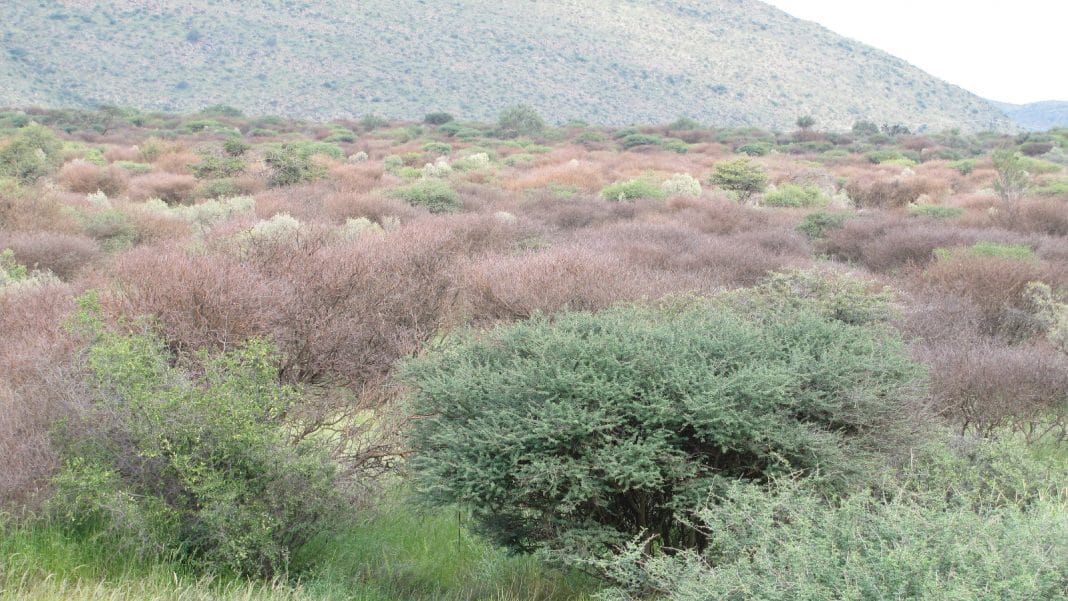 Infectious bush thickening (BT) and bush encroachment (BE) are caused by the densification of alien and indigenous woody shrub and tree species, such as Senegalia mellifera (black thorn), Vachellia species (Senegalia and Vachellia were previously known as Acacia spp) and Prosopis (mesquite). BE refers to instances where woody species (shrubs and trees) establish in areas where they did not previously occur, while bush thickening is when woody species that already occur in an area become naturally denser.

Woody cover caused by bush thickening or bush encroachment has nearly doubled in the last decade in many commercial, communal and conservation managed rangeland (grazing) areas. The Savanna biome (includes grasses and woody species), which is the largest of the nine biomes in South Africa, is more prone to BE and bush thickening and therefore occurs in large regions of especially the Limpopo, North West and Northern Cape provinces.

Rangelands in the Savanna are extensively used for the production of livestock, wildlife (game) keeping for hunting and ecotourism, the conservation of biodiversity and subsistence crop farming. The vegetation structure and composition of these savannas vary considerably due to differences in topography, soil and climate (Mucina and Rutherford, 2006).

The increase in density and cover of the woody species results in dynamic changes in vegetation composition and structure over time, causing an imbalance in the grass-woody ratio. The loss of grass cover, especially palatable forage species for livestock production, has a negative impact on the socio-economics of the land user and decreases the economic value of the land.

Bush encroachment and bush thickening are mainly caused by a combination of factors, which include a lack of fire frequencies, poor grazing management practices, below-average rainfall and drought (often caused by climate change), competition between C3- and C4-type plants and elevated CO2 levels. C4 plants, which include most grasses, can concentrate CO2, which enable these plants to photosynthesise even when the stomata are closed, whereas C3 plants, which include most woody plants, cannot. Bush encroachment and bush thickening lead to land degradation and cause a loss in the ecosystem services that provide benefits to the people using the land.

To control bush encroachment and bush thickening and compensate for economic losses, land users apply active or passive restoration methods, which include bush-clearing (including bush control) technologies. Many types of bush-clearing methods are available, including chemical, manual, mechanical, biological or a combination thereof. The type of clearing methodology is determined by the density and type of woody species, as well as the type of enterprise.

Although labour intensive, BP is a cost-effective restoration method since no fenced paddocks nor rotational grazing is required to protect/rest the land.

In a livestock production system, more grass biomass is required for grazers, whereas in a wildlife (game) production system a combination of grasses and woody species are important for both grazers and browsers. In some land use types, a combination of enterprises is practised, i.e. livestock, wildlife and/or conservation. The type of bush-clearing methodology also depends on the type of soil, topography, landscape properties, climatic conditions (especially rainfall), as well as the economic situation (funds available) of the land user.

Clearing by distributing the arboricide (herbicide that controls woody species) by an aeroplane may be much faster and larger areas can be cleared at once, but it is less selective. Clearing by hand, or manual and mechanical methods, combined with chemical applications may take longer, but is more selective, as only certain species can be targeted (e.g. large trees such as Vachellia erioloba [camelthorn] or Combretum imberbe [ironwood/hardekool] can be avoided) (Harmse et al., 2016).

The clearing of woody species also depends on the land user’s purpose, which may include the production of charcoal, the making of fodder (boskos) for animals, the use of timber for construction purposes or using the wood for cooking and heating. Establishing different enterprises may result in job creation opportunities, thereby contributing to the wellbeing of people.

The Society for Ecological Restoration (SER) defines ecological restoration as the process of assisting the recovery of an ecosystem that has been degraded, damaged or destroyed. Restoration of degraded rangelands is not only restricted to environmental conditions, but also has to do with active intervention as far as social and economic conditions are concerned (Van Andel and Aronson, 2006).

Depending on the soil type, soil moisture (including rainfall pattern) and landscape properties, as well as the condition of the soil seed bank, restoration often includes the re-seeding of palatable, perennial grasses to improve fodder production for the grazing animal. As re-seeding can be very costly, leading to a high financial burden for the land user, it is advisable to rather implement the brush-packing (BP) methodology.

BP entails covering the soil surface with organic material such as woody branches (i.e. after the clearing of woody species) and plant leaves to promote grass growth and biomass production. BP also protects seedlings from disturbances (e.g. defoliation by grazing and trampling), creates an ideal microclimate (such as moisture content, soil structure and temperature and nutrient content) and facilitates the germination and establishment of plants under the brush (woody twigs).

If branches and roots from plants with nitrogen-fixing abilities (e.g. Vachellia and Senegalia species) are used, the decomposing brush will enrich the nutrient component of the soil, increase the functionality of the vegetation and control water flow and erosion.

Although labour intensive, BP is a cost-effective restoration method since no fenced paddocks nor rotational grazing is required to protect/rest the land. Due to its labour-intensive nature, clearing invasive woody species and using the brush for restoration also provides job opportunities.

In South Africa, the Natural Resource Management programmes of the Department of Environment, Forestry and Fisheries (DEFF) implemented the ‘Working for … programmes (e.g. Working for Water, Working for Land and Working for Ecosystems). Through these labour-intensive programmes, invasive species (alien and indigenous) are controlled and sustainable land management (SLM) practices implemented (www.environment.gov.za). DEFF also implements various research and development projects where restoration methodologies are tested.

Research carried out by the North-West University (NWU) proves that BP increases the grass biomass for forage production in bush-cleared areas. In all plots where BP is implemented as a restoration method, the plant biomass (kg/ha) is significantly increased if compared to plots where no BP was applied (Kellner et al., 2019). It can therefore be concluded that BP serves as an effective method to restore the grazing capacity of degraded rangelands and to implement scientifically sound SLM practices.

Milk and microbes: A match made in heaven

Growing hemp in South Africa: A long road ahead