It is common knowledge that parasites can wreak havoc on a small-stock farm. Internal parasites, or worm populations, have a habit of catching producers off guard and leading to major production losses.

According to renowned veterinarian, Dr Faffa Malan, parasites in small stock and cattle are divided into three classes:

Dr Johan van Rooyen, veterinarian at the Steynsburg Animal Hospital, recommends using the correct methods to identify animals on individual farms and in specific regions. “If you take the biosecurity of your farm into account, then methodical worm control, including regular faecal egg counts, is invaluable.”

An effective worm control plan
1. Monthly examinations of faecal egg samples of at least ten animals. Samples must be fresh and of similar size.
2. Complete records of each herd regarding management which may affect your sheep’s natural resistance.
3. Samples must be kept cool and stored away from extreme heat.
4. Faecal egg counts are often indicative of nutritional problems, even before animals show symptoms.
5. Never dose an entire herd of adult animals. Dose only affected sheep by applying targeted selective treatment (TST).
6. Climate conditions and environmental factors normally determine the frequency with which internal parasites occur. Dr Van Rooyen summarises it as follows:

Wireworm is the dominant summer worm. It occurs in wet, hot conditions and areas with grass, which they use to swim up against. Worms have built up reasonable resistance to anthelmintics due to overdosing and indiscriminate use of agents. TST is required.

Bankrupt worm mostly occurs in winter when animals suffer from nutritional deficits. Problems occur during winter rainfall and on irrigated fields where artificial winter rainfall is created. Some bankrupt worms favour kraals and can even penetrate animals’ skin. Faecal egg counts and larval identification are essential to control these worms.

The nodular worm, which causes slight weight loss when livestock ingest it in summer, is more difficult to combat. The nodules in the stomach complicates sheep’s feed digestion in winter.

Tapeworms in young lambs survive only for as long as the lamb ingests milk. Especially distressed lambs, such as twins, should be dosed. Tapeworms in adult animals cause little damage.

These flukes require stagnant water and an intermediate host such as shelled snails in the colder months. The immature pear-shaped flukes cause diarrhoea, while liver flukes cause liver damage. Adult pear-shaped flukes do not necessarily damage the rumen; they do, however, lay eggs and infect the environment. Liver flukes are blood suckers and cause damage and stunted growth in livestock. — Carin Venter, Veeplaas

Twelve-point prevention programme
Steynsburg Animal Hospital proposes a twelve-point programme set up specifically for wireworms, as well as all roundworms:
1. Never dose the entire herd – only weaker or infected animals.
2. TST is recommended in animals in poor condition or animals exhibiting the following signs: watery/phlegmy/purulent nasal discharge, pale eye mucosa or swelling under the chin.
3. Never move newly dosed animals to a clean camp. It infects the new camp with resistant worms which have survived.
4. Faecal egg counts must be performed monthly.
5. An annual faecal egg count reduction test (FECRT) will show which methods work best.
6. Consult a veterinarian rather than follow the advice of non-experts.
7. Provide sheep with enough feed, licks and treat them for trace element deficiencies. Embamin TE and vitamin A (Embavit) can boost immunity in periods with high worm infestation, e.g. lactation, shortly after weaning or on hot, humid days.
8. Use only products with one active ingredient. It prevents resistance to two or three groups of anthelmintics used simultaneously.
9. Select rams for resistance and the ability to handle wireworms. Ewes that require repeated TST should be culled.
10. Treat only lambs older than six weeks with Moxadectin three weeks after the first good spring rains and constant warm nights. Perform a Famacha test every 14 days to help boost immunity.
11. Know your area and do not put vulnerable young animals or weaner lambs in camps with ponds, wetlands, irrigated fields or where wireworm is present. Overgrazed ram camps are wireworm hotspots.
12. Apply strict on-farm biosecurity to prevent parasites from spreading. 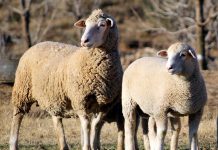 The role of faecal egg counts in effective worm control