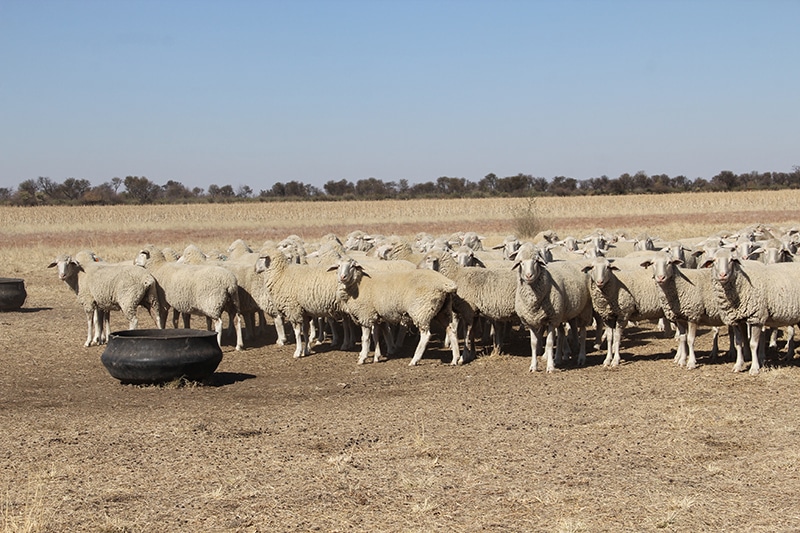 For many livestock farmers crop residues are an indispensable link in their fodder flow programmes, especially in the eastern sourveld areas of the country, where the grazing value of winter veld is very low. The percentage crude protein of saved winter veld varies between 3,5 and 5,3%, while that of maize residues ranges from 6 to 8,6%.

Digestible organic matter (DOM) of saved winter veld ranges between 50 and 53% and total digestible nutrients (TDN) of maize residues amount to between 60 and 84%.

According to Dr Josef van Wyngaard, technical manager at Voermol, the stocking rate on crop residues will depend on several factors, including plant density and yield, cultivar type, harvesting method and climate factors such as drought.

Although crop residues are undoubtedly a valuable and inexpensive winter feed source for livestock, he warns that some potential problems may arise when animals are moved onto fields without having been properly adapted beforehand. This includes:

Proper management and lick supplementation can solve all these nutritional problems and deficiencies, and allows for proper utilisation of crop residues as winter grazing.

Typical fodder flow planning for livestock in the summer sowing areas, he says, consists of autumn veld up until April, soya residues from April to May/June, maize residues in June to September/October and then summer veld.

As we are already in July, soya bean residues will have already been depleted. Dr Van Wyngaard nevertheless provides some guidelines for the use of soya bean crop residues, as it is such a crucial component of the fodder flow programme of farmers in the eastern parts of the country.

Soya bean has a high protein content of around 36%, but it also has certain limitations in the form of anti-nutritional factors, which include trypsin and chymotrypsin inhibitors and an amino acid profile with low digestibility. This leads to thick and sticky colostrum or reduced milk production in ewes with lambs on soya residues, which in turn leads to poor lamb growth. The correct lick supplement must therefore be given to overcome these limitations.

When using raw soya beans, urea should not be included in licks and rations. The urease activity in raw soya beans quickly converts urea to ammonia, which can lead to urea poisoning.

Mature sheep are excellent soya residue utilisers, as their bypass protein requirement is much lower than that of lactating ewes and lambs. However, sheep tend to overeat in fields strewn with soya bean kernels, which leads to mortalities due to nitrate poisoning. Consistent adaptation over at least 14 days as well as a properly formulated lick are essential in mitigating this risk.

The energy value of freshly harvested maize fields is high (TDN of 60 to 84%), especially when a fair amount of grain has been wasted. The amount of grain left after harvesting can comprise between 1 and 5% of crop residues.

Proper management and lick supplementation can solve all these nutritional problems and deficiencies and the potential of crop residues as winter grazing can be fully utilised.

Sheep and cattle utilise the finer components such as grain and leaves first. The risk of acidosis is therefore very high in the first few weeks, especially if the animals have not been properly adapted beforehand. The phosphorus content in maize compared to winter veld is relatively high. High phosphorus intake over a prolonged period can lead to the development of bladder stones in especially sheep. The crude protein content of maize residues is also marginal to low, which can affect animals that have high nutritional requirements, such as young and lactating animals.

However, Dr Van Wyngaard warns that maize residues should not be grazed at the expense of long-term grain production. In a study conducted over 17 years, it was found that grain yield had decreased by 280kg/ha where all residues were removed, compared to trial sites where no residues were removed.

In terms of the aforementioned stocking rate, around 40 to 50% of the residue is removed. More than half of the residues are therefore left on the field to aid the maintenance and build-up of organic matter. Around 21% of the residues that are not grazed, disappear during the winter due to wind and weathering.

The energy value of freshly harvested fields is high, especially when a fair amount of grain has been wasted. The maize left on a freshly harvested field varies greatly, but quantities of 100 to 300kg per hectare have been recorded and research using sheep with oesophageal fistulas shows that sheep can ingest as much as 800g of maize within half an hour.

Sheep that are not adapted to grains tend to develop acidosis, which can greatly increase losses. Another disadvantage of maize residues is that the protein value is marginal to low, which affect especially animals with high nutritional requirements, such as ewes with lambs, beef cattle cows with calves, weaners and weaner lambs. Calcium, magnesium, zinc, copper and selenium (usually on red soil) deficiencies also occur.

It is therefore wise to use a lick that addresses these nutritional deficiencies and problems, he recommends. Make sure the lick contains the correct buffers to limit acidosis, as well as anion salts to prevent bladder stones in wethers and rams. It should also contain a medium amount of bypass protein. A molasses-based lick is ideal, as it ensures good intake and will not be dispersed by the August winds.

How to prevent acidosis

Gradual adaption on maize is another management measure to prevent acidosis. The lick should be fed to sheep for at least 14 days before moving them onto the maize field – maize should be combined with plenty of roughage and fed uniformly. Start by giving 200g of maize or maize cobs per SSU per day, increasing it by 100g every second day. Limiting the time spent grazing is another option, although it is not as effective as gradually adapting them on maize.

The adaptation period of sheep that are familiar with maize, can be shortened significantly by dosing them with a product such as Lacticon S. Research shows that high-quality dry weaners can grow up to 1,2kg per day over a 60-day grazing period when supplemented with 1kg of correctly formulated lick per day.

For the first four weeks, lambs grow up to 260g per day on freshly harvested fields on which a lot of grain has been left, but this growth pattern flattens as the grain becomes less. Depending on animals’ quality and growth potential, up to 100kg live weight per hectare can be produced in the case of weaner calves, almost the same amount in sheep, and up to 13kg clean wool per hectare in high-quality dual-purpose sheep.

Pasture-raised eggs in a regenerative system