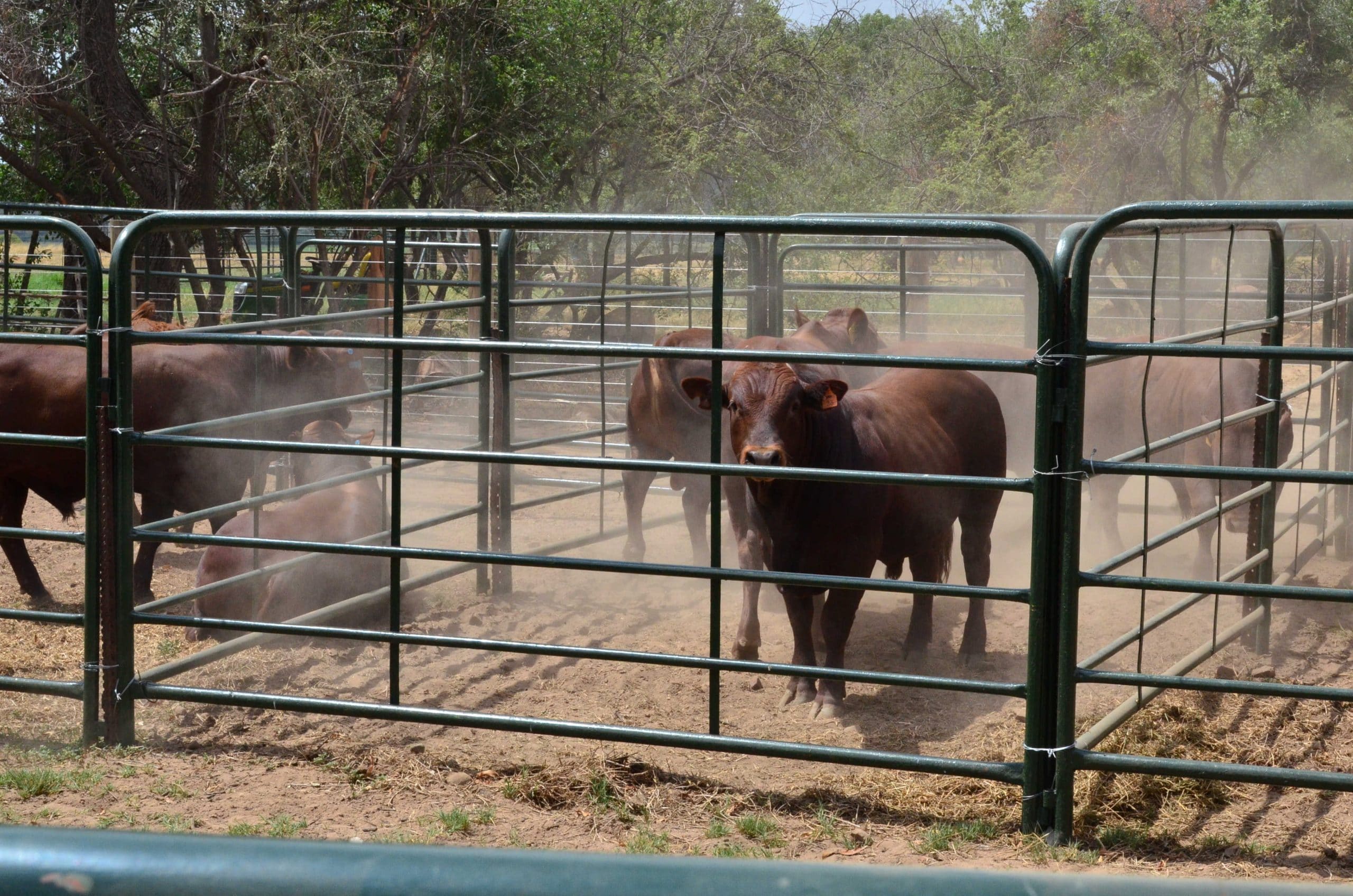 A diversified farming operation has increased its yield per hectare and reduced its risk, despite the land once being written off by agricultural consultants as being too marginal to be profitable. Peaches, citrus, grain, cattle, game and a transport division are part of this diverse agricultural business.

Bufland farm is situated between Mookgophong and Marken in the north of the country. The road cuts through ridges and gorges before it plateaus out to reach Bufland, where Lukas Eksteen Sr. settled in 1959. He later bought Buffelsfontein, where his sons and grandchildren now farm.

An analysis of the farm’s soil led consultants to advise Lukas Sr. that the land was good only for mining builders’ sand. Undeterred by this report, he started farming.

Lukas Sr. farmed groundnuts, sorghum, maize and Red Poll cattle. Groundnuts eventually became the farm’s main crop. The method of piling groundnuts into heaps on the land before gathering them up, led to a disaster in 1967. Rain halted harvest completion and the heaps of groundnuts rotted where they lay.

Not all was lost, however, and Lukas Sr. became the first South African farmer to dry groundnuts artificially. The floor of the barn was used for the drying process. The groundnuts were spread out over loose sieves that rested on top of cement bricks and air was blown underneath the sieves with a tractor-driven fan.

In time, long pipes under which a fire was made, were used to suck in hot air, aiding the drying process. Later, the drying system was mechanised. The groundnut operation was shut down only two years back.

In 1976, Lukas’s eldest son, Leon, started farming with his father. Maize was then the primary crop, but they soon started to feel the pressure of rising input costs. Leon says his father had told him that to harvest a rand, he put fifty cents into the soil but, as input costs rose, 80 cents was needed to make a rand and warning lights went on for the business.

They decided to go into seed maize and irrigated crops to increase their production value per hectare.

A lifelong interest in fruit had Lukas Sr. planting every conceivable type of fruit tree in the home garden and on unused plots of land on the farm, where he could see how well the trees did. When grain crops became less profitable, he started researching, had the soil analysed and went to the Cape to look at various methods of fruit tree cultivation.

Lukas Sr. started his fruit orchard operation with 40ha of Navel and Valencia oranges. His son Dewald joined him in the business to help manage the new enterprise. The citrus orchards have now grown to 140ha and Dewald’s son, DW, has become a key player in the orchard management.

Citrus is seasonally labour-intensive and five years into the new operation, they realised that they needed another enterprise if they were to keep their labour force gainfully employed throughout the year. Any new venture would have to dovetail with the citrus operation.

They decided to grow peaches and established 10ha of peach and nectarine trees – that modest start has now expanded to an 85ha operation. The varying requirements of different trees are met by different microclimates on the farm and water can also be more effectively used.

Water is the greatest limiting factor on the farm, and every possible innovation and technological advance is employed to use the resource efficiently and to get maximum income per cubic metre of water. The limited water supply means that year-round cropping is not possible. Orchards are supplied by micro-irrigation systems and moisture meters make sure that only the water that is needed is applied.

The Eksteens keep a close watch on new technology for automatic crop irrigation, increased efficiency and ease of use. They are considering the installation of an irrigation system that eliminates unnecessary water application by taking rainfall data, forecasts and actual rainfall, into account.

To make the most of every cubic meter of water and to further spread the risk, crops under centre pivot irrigation were changed to high value crops, including seed maize, dry beans, peppadew, lucerne and potatoes. A modern facility for grain sorting has also been set up.

Labour is managed as efficiently as possible. Trees are pruned by hand, and fruit is thinned out and harvested by hand. To make orchard work easier, they erected a cart with platforms at various heights on which workers can stand to prune and thin. A tractor pulls the cart slowly down the rows, enabling workers to complete the work in one pass.

The Eksteens have always had cattle on the farm, although beef was a minor branch of the business. But difficult weather conditions have led to a significant expansion of the livestock enterprise, accompanied by measures to improve cost efficiencies and land use.

In 2007, unusually icy weather decimated over 40ha of citrus, which was a huge financial blow. In 2008, an October hail storm destroyed 47% of the peach crop, the entire citrus crop for the next season and all the wheat (the latter was insured against hail damage). Leon says the setback cost them dearly.

Fortunately, Lukas Jr. who has a passion for livestock and has academic credentials in animal production, was ready to expand the beef herd, which really came into its own in 2011.

The Bufland Bonsmara Stud consists of 200 breeding cows, a combination of their own stud animals and animals bought in from the well-known studs of John Lichti and Peter Beith.

A feedlot and bull testing station were set up on the farm. In the testing station, the performance of the Bufland animals, and the animals of other breeders, is measured and genetically superior animals identified as part of efforts to promote the meat industry in the Bushveld. The farm’s commercial cattle herd of 300 breeding cows provides the feedlot with weaner calves. In the feedlot about 800 animals can be handled at any one time. The aim of the feedlot enterprise is to finish approximately 2 400 animals a year.

Dewald’s son, Roland, who has a wildlife management diploma, has joined the business and is establishing a game sector on the farm, mainly for hunting.

Growth and diversification in the farming business meant that transport started to play an increasingly important role and they decided to set up their own transport business. At times when they do not need to use their trucks they contract out the service to others in the sector. This way, the trucks are used more efficiently. Luan, Dewald’s other son, makes an important contribution to the smooth functioning of this division.

Business risks are more widely spread in a diverse operation such as this and challenges can be more easily handled, says Leon.

The tale of Philip’s Tunnel

Deciduous fruit: The when and where of SA production