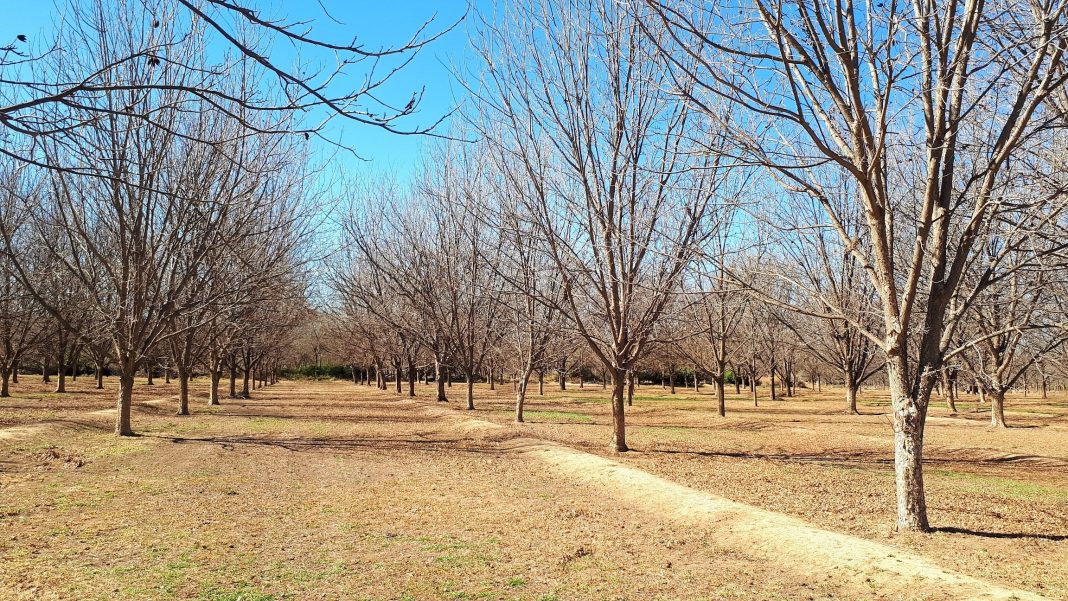 Agriculture in the Eastern Cape normally leans towards various livestock and citrus undertakings. Interestingly, the cultivation of pecan trees has increased over the past few years, mostly in areas such as Cradock and Somerset East which have sufficient water supply, thanks to the Great Fish River.

The farm Longacre, where pecan trees are cultivated, is located between Cradock and Hofmeyr. If you visit during harvest time, you will be met by the curious sight of tall, leafless trees.

The trees cover 70ha and are managed by Philip Antrobus whose late father, Michael, planted the first rows of pecan trees some 40 odd years ago. Philip’s great-grandfather, Geoffrey Antrobus, who came from England, bought the farm Normanskop and renamed it Longacre, somehow unwittingly doing justice to the neat rows of orchards that can be seen today.

“The word ‘pecan’ means to crack with a stone,” explains Philip. These deciduous trees grow fast, can get very tall, and can reach the ripe old age of 300 years. “The pecan tree is native to North America and the indigenous people used it to sustain themselves for three months during winter.”

When it is planted from seed (the nut), the pecan will not produce a tree that is identical to the parent. To cultivate a tree of a specific variety, buds and shoots from the parent tree must be grafted onto a seedling rootstock.

Pecan trees can live under six feet of snow, but certain methods are required to help get them there. “That is one of the reasons why we do not fertilise the trees after January, since it will promote growth and allow early frost to kill them later on.”

In the Karoo, pecan trees enter dormancy around the second week of May. Harvesting takes place from June until early August, while pruning is done immediately after. New trees can also be planted once the nuts have been harvested. Philip would like to expand the orchard size to 100ha, which will require new watering systems.

“Pollen shed, pistil activity and pollination of flowers all happen three weeks after the leaves have appeared. The Northern Cape has a three-week advantage, and they capitalise on the extra heat.” Philip adds that one of the challenges that pecan growers face in the Eastern Cape, is the cool easterly breeze, which lowers temperatures at night.

Planting an orchard requires good planning. There are not many self-pollinating varieties. In basic terms, there is a Type I variety (protandrous with early- to mid-season pistillate receptivity and pollen shed) and a Type II variety (protandrous with mid- to late-season pistillate receptivity and pollen shed).

An interesting fact about pollen is that it can fly up to 50m far. However, if the conditions are too dry, it will dry out and by the time it reaches the nuts, nothing will happen. This is what happened during the 2018/19 production season. “We experienced unusually warm winds during our pollen season,” says Philip. “Usually our weather is more settled, enabling the pollen to fly without drying out.”

An important factor, if not the most important, is that pecan trees love water. It is important that the available water is enough for the total requirement, even in dry years.

There are five critical watering periods for mature trees:

A tree can lose between 800 and 1 000ℓ of water per day due to evaporation, which is why an irrigation system can go a long way in insuring that each tree gets a minimum of 700ℓ per day. A safe guideline is to irrigate at least 60% of each tree’s canopy cover.

A crucial time for watering at Longacre is just before the nuts are harvested. It can be a tricky business, comments Philip, as the orchard floor should ideally be as dry as possible during harvesting.

Prospective pecan growers should realise that a lot of work goes into getting the trees to the production stage.

At Longacre, spraying typically starts in October and every two weeks thereafter, until the second week in January. Philip sprays macro- and micronutrients. “We don’t spray any insecticide. I believe once you start doing that, you’ll never be able to stop.”

Regarding pecan cultivation in general, the use of chemical products is only allowed when treating the following:

It is generally advised that the effect that beneficial insects such as spiders, praying mantises, lady bugs and lacewings can have on pecan orchards, are considered before chemical products are applied.

A mindset and strategy

Philip remarks that anyone interested in cultivating pecan trees should not be expecting money to grow on it. “Starting out is expensive and can easily cost around R300 000/ha, with the expectation to start earning an income from the trees after a period of ten years.”

Concerning marketing methods, he likes to ‘think like an American’, meaning that the market as we know it was developed by Americans. “The only four regions in the world that are major pecan producers are North America, Mexico, Australia and South Africa, with China as the main importer of nuts worldwide.”

His currency preference is set on a fixed US dollar price. “The price for nuts is determined on a sliding scale in terms of nut size, namely over-sized, extra large, large, medium and small. The premium price is obviously set on over-sized nuts.”

He quotes his father, who used to say the following about pecan trees: “Luckily, pecan trees cannot read literature. Treat pecan trees like humans, with respect and care, and they will look after you.”

Although there are better and worse years in terms of production, he also believes that there will never be an overproduction of nuts.

Philip’s advice for anyone who would like to sustainably cultivate pecan nuts, is to contact the South African Pecan Nut Producers’ Association (SAPPA). One of its main objectives is to supply correct information to the industry.

“As board members we have identified the minimum requirements of what a pecan tree should look like,” says Philip. “This allows us to select the variety that will perform best in a specific area.”

For more information, contact Philip Antrobus on 082 560 7696 or send an email to [email protected].

The hidden role of water on the earth

Why the wines of the future will be made from hybrid...