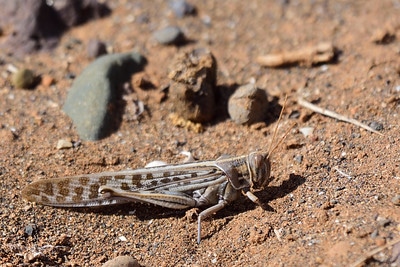 The desert locust, Schistocerca gregaria gregaria (Forskål 1775), is one of the world’s most notorious agricultural pests. As described during the eighth plague in ancient Egypt, the outbreak of locust infestation caused famine for humans.

In its solitary non-swarming phase, the desert locust is normally restricted to the arid and semi-arid areas across a broad belt of the Sahara and Sahel region of Africa, reaching across the Arabian Peninsula into north-west India. However, during the most severe swarm outbreak periods it can invade up to 20% of the world’s land surface, from Portugal in the west to Myanmar in the east, and from Uzbekistan in the north down to Tanzania in the south.

According to the United Nations Food and Agriculture Organisation (FAO) the unusually wet weather in Ethiopia, Kenya and Somalia towards the end of 2019 contributed to the massive swarm outbreak, driving an explosion of locusts that are destroying crops and threatening food security across the region.

However, there are no historical records of desert locust swarms invading Southern Africa, and the current threat to Southern Africa from these locust invasions is considered to be very low.

Protective measures are in place

Although the risk of locust swarms invading South Africa may be low, the country is prepared to manage or control such outbreak with local expertise, pesticide stocks, spray aircraft and other measures. The Agricultural Research Council (ARC) and the Department of Agriculture, Land Reform and Rural Development (DALRRD) have considerable experience in the management of locust outbreaks, based on previous incidents of red and brown locust that were successfully managed in 1980 to 2005.

Southern Africa has its own sub-species of the desert locust, known as Schistocera gregaria flaviventris (the Southern African desert locust) (Burmeseister 1838), which is endemic to Southern Africa and can be found as solitary adults across the semi-arid areas of South Africa, Namibia, southern Botswana and into southern Angola. Although this subspecies can breed with the North African Schistocerca gregaria in the laboratory, the offspring are infertile, rendering the possibility of swarms unlikely.

“It is therefore considered that the southern African subspecies has been an isolated population for a very long time and is cut off from the north African Schistocerca by the tropical forest zone in Africa. The Southern African desert locust only rarely develops gregarious populations after good rains in sand dune area of the Kalahari desert to the north of Upington and in south eastern Namibia,” says ARC CEO, Dr Shadrack Moephuli.

Policies should maximise the potential of migration