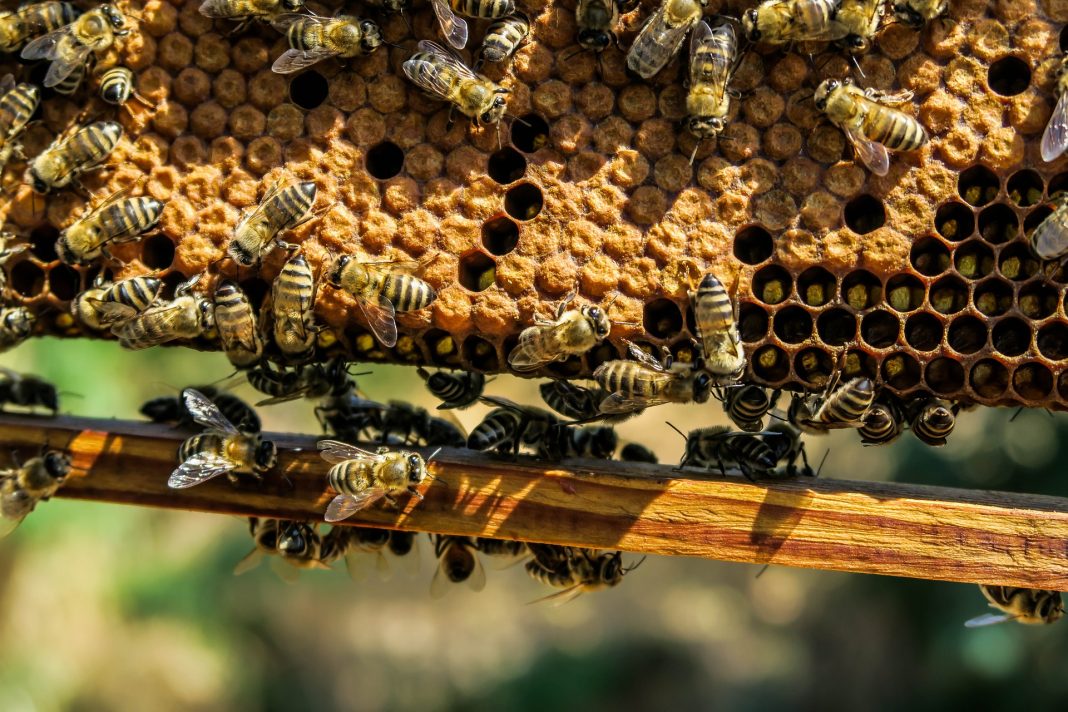 This article was originally published by The Conversation.com. Click here to read the original article.

There is widespread concern about the global decline of honey bees and the associated loss of pollination services.

The honey bee is the single most important species for crop pollination. This is because honey bees are easily managed and can be moved around to pollinate various food crops. It is estimated that a third of the food we consume every day relies on pollination. And this is mainly provided by bees.

But bee populations are in decline. Several factors have been identified as possible causes including poor bee nutrition caused by an inadequate intake of nectar and proteins: Colony Collapse Disorder when most of the worker and adult bees suddenly die; threats posed by neonicotinoids, insecticides that affect the central nervous system of bees, and finally attacks from the varroa mite, a parasitic mite that transmits diseases and often viral diseases to the bees.

Concern over bee population declines has led to interventions being taken. These include the suspension or banning of several pesticides across Europe. In the US, bee health programmes have been set up, while the department of agriculture has provided farmers with more than US$4 million to improve the health of honey bees in the Midwest.

But solutions are hard to find, and are complicated by the fact that, in parts of the world, there are two distinct groups of bees: wild populations free to select foraging and hive sites, and managed bees kept in artificial hives for commercial crop pollination and for honey production.

This is particularly true when there are a number of hives about, which leads to an increase in competition for nectar and pollen resources. In these scenarios wild pollinators come off second best.

What does all this mean for managed honey bees in different parts of the world? Are these new findings applicable to all countries? My view is that they are not, and that in countries like South Africa different conditions exist.

Recent research found that managed honey bees should be kept as far from conservation areas as possible. This calls for close examination. Where, for instance, is most of the research and commentary coming from? Does it make a difference that they are from non-African systems, where honey bees are not indigenous?

And what difference does it make that, in Africa, bee species managed by beekeepers are the same as wild bees?

African bees trapped into hives often abscond and swarm and the beekeepers have no idea whether their bees are ‘new’ or ‘old’. Does it make sense to even talk about a resident population of bees (managed or wild), because they are housed in a beehive? How does one quantify which foragers (wild or managed) are competing against which, or which ones come out on top?

This issue has become a bone of contention in the Western Cape where beekeeping provides an income for the  beekeepers and indirectly provides jobs in the extended agricultural sector. It is also a much needed pollination service to growers. Pollination demand in the Western Cape increases annually, with projections indicating significant increases.

It has bee said that placing commercial honey bee hives in fynbos areas, the 100km to 200km wide coastal belt stretching from Clanwilliam on the West Coast to Port Elizabeth on the south-east coast, could negatively impact the hundreds of other indigenous pollinators and their conservation because of competition for nectar resources. The City of Cape Town’s Biodiversity Management Branch acknowledges that this aspect has not been sufficiently interrogated, but that its mandate for conserving biodiversity means they must follow the precautionary principle.

However, this approach makes no sense given that, in the African context, wild and managed honey bee populations complement each other. They co-exist because they are the same species/subspecies. In my opinion, they cannot be separated or spoken of in isolation.

Many species have co-evolved with the natural vegetation. These include the Cape bee in the winter rainfall region of southern Africa and the African bee in the summer rainfall area.

It would obviously be unwise to overstock an area with managed hives. But to test how much an area can accommodate, or even support, bee populations will require a good body of scientific evidence. This evidence is not available yet in South Africa.

It would be naïve to assume that there are no concerns when it comes to the complexity of wild versus managed honey bees. For example, research about disease transfer strongly links the presence and prevalence of diseases and pathogens, common in managed honey bee colonies, to disease in wild bees.

It is not enough to simply adopt and implement an approach, designed for Europe or the US, which may simply not be relevant on the African continent. Africa’s situation requires a different approach.

It is critical that South Africa understands the context in which conservation measures are developed: it shouldn’t just conserve for the sake of conservation. –  Tlou Masehela, South African National Biodiversity Institute