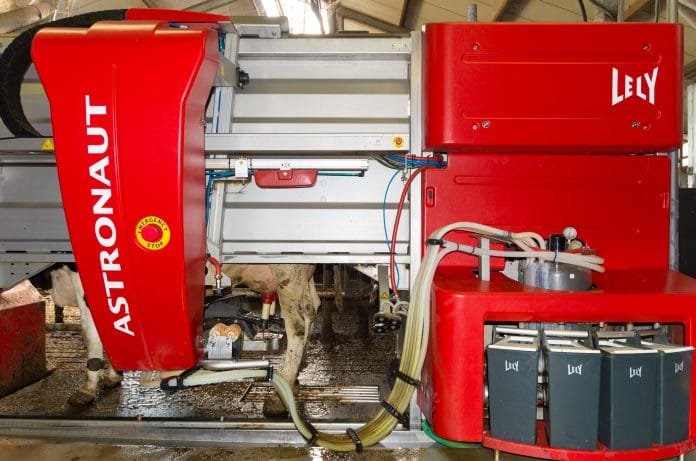 The dairy industry has been at the forefront of farming enterprises for quite some time where technological development is concerned. As technology develops, other facets of the industry must naturally adapt in order to keep up. According to Kenneth Botha, a dairy cow nutrition specialist at Barnlab, a good example is the challenges posed by robotic milking systems.

Kenneth explains that the feeding patterns in a total mixed ration (TMR) system are very different from that in a robotic milking system. The reason for the difference is simple: The behaviour of cows is different, because the fence system manipulates cows to move in certain directions. This ensures regular visits to the robotic milker.

“In a robotic milking system, the robot is installed on one side of the cow housing, and access is controlled by a gate system. Cows visit the robot 3,3 times a day on average to be milked. To limit cows’ visits to the robot, the frequency of their visits is controlled by a computer system. Cows with a low milking frequency are removed by a worker and herded into a holding area, which allows all the cows to be milked regularly.

“The biggest challenge is the gate systems – cows must walk through them to either be milked or to walk to the feed troughs to eat. All cows returning from the robotic milker have access to the TMR after having been milked. The problem with these systems is that cows need to walk a long way to the one side of the housing before the gate system determines whether they will be milked or whether they can proceed to the feed throughs,” he explains.

Despite these challenges, increased milk production (more than 38 litres) is feasible with these systems. Cows are fed concentrates with a very precise specification in the robotic milker area, but in limited quantities. The mistake often made when using this system is that cows receive too many feed pellets during milking, and this harms rumen function.

The difference between this system and a TMR system is that the automatic feeder in a TMR system will move past the cows, they will move out of their sleeping pens where they have probably been ruminating, and they will go to feed. The distance from the sleeping pen to the feeding area is only a few metres.

In sharp contrast, the trek to the robotic milker is relatively far. It is therefore an effort to get milked. This causes a change in feeding patterns, especially since the cows feed less frequently but consume larger volumes at a time.

Kenneth believes the biggest feed challenge caused by robotic milking systems is dry matter intake. “To overcome this problem farmers now use workers, who ensure that each cow moves through the milking system regularly. When a cow falls behind she is simply fetched to be milked and feed intake is indirectly increased.”

Kenneth says the tendency in the past was to feed cows in the milking parlour too much concentrate – up to 8kg at a time. “This triggered major acidosis problems, as the large volume of concentrate in the rumen reduced the pH too much.

“Trials are continually being conducted to find out more about the effect of robot-fed concentrates on the energy and hormone balance of cows. What we do know is that too much concentrates in the robots, especially the ‘wrong’ concentrates, reduces milk production in cows compared to the nutrition in TMR systems.”

Another system that creates its own set of challenges, but also has specific advantages, is the so-called cafeteria system. Kenneth explains that in such a system a typical cow producing an average of 30kg of milk per day, will consume roughly 18kg of her ration in the form of concentrates; the rest of her requirement, approximately 6kg, will be in the form of good quality roughage. The cow thus decides how much she will ingest from each source.

The main cause of acidosis in a cafeteria system is due to the fact that animals do not ingest enough good quality fibre or roughage, or that animals ingest too much starch or concentrates per feeding. The amount and effectiveness of the neutral detergent fibre (NDF) in the roughage is therefore important. High roughage intake with an effective fibre content is necessary.

The key words in a cafeteria system are therefore ‘sufficient intake of good quality hay’ – not excellent quality nor average quality. The ideal is a grade one lucerne or a low-starch maize silage, or palatable and highly digestible sorghum or grass silage, which does not cause acidosis due to the high starch levels.

The other important aspect of this cafeteria system centres around a very specific feed trough, which is set daily to release the exact amount of pelleted concentrates per cow. “The daily setting is mainly to limit overfeeding (per meal). Cows lick out the pellets from the opening which increases the saliva the cow releases, which in turn helps to buffer the rumen. The system requires careful and proper management to prevent the danger of acidosis.

“The type of concentrate is also specifically formulated to reduce acidosis. Standard dairy cattle feeds cannot be used, because the wrong energy sources will definitely lead to acidosis. The concentrates in these systems are utilised to consistently manage the flow of concentrates through the tailor-made feed troughs.”

A system that is increasingly being used in pasture-based dairies, is a so-called needs-driven precision supplementation system. In to this system, cows will receive supplements based on their days-in-milk, milk production and projected condition score. Each cow is therefore fed according to her unique requirements.

Computer systems adjust the nutrition of each cow in the milking parlour. These quantities vary from herd to herd and are therefore introduced in the herd according to each herd’s specific profile and needs.

“The cows are left to graze, but they also receive a combination of three types of pelleted nutritional sources when they enter the milking parlour, namely protein pellets, energy pellets and mineral pellets. A cow at peak production, which is roughly 30 litres a day, will receive a specific amount of protein, energy and mineral pellets.

“As she progresses through her lactation and her production begins to decline daily, the amount and combination of the three types of pellets will start changing to suit her requirements. Higher producers, of course, also receive a different ratio of the three pellets than lower producers, and this makes the system very profitable,” he explains.

Kenneth says a facet that is inextricably linked to precision feeding technology, is the computer systems with which it is managed. These systems are very finely tuned to identify and report any mistakes during the mixing process; it will even stop the entire process if necessary.

The cost effect of errors is also reported. This way the farmer knows exactly what the implications will be. Mixing wagon operators are even monitored to determine who is the most accurate. It is even possible to link the compensation of feeding staff operating mixing wagons to their accuracy.

“With the current low milk price it is necessary to remove less profitable cows from your system. The technology now available to farmers makes the process easier. Identify the cows that produce more milk with less feed and remove the cows that are heavy on fuel from your system,” he says. –Izak Hofmeyr, Stockfarm

#WorldHungerDay: Is zero hunger by 2030 achievable?