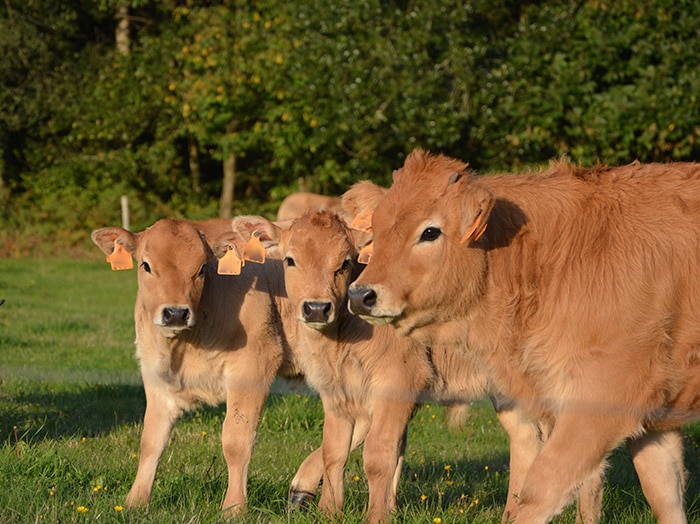 It all started with a conversation I had with a farmer who mentioned a friend who had trouble with newborn calves that were unable or unwilling to find the dam’s teats after birth. He referred to these newborns as ‘dummy calves’.

I contacted the farmer, who confirmed that he either had to force-feed the calves by putting the mother in the crush or feed them with a bottle. After about four days, he said, most calves seemed to start finding the dam’s teats on their own.

Apart from the inconvenience of having to feed these calves every few hours, there was the issue of not knowing how many calves might have been lost in the veld. He did some research on the cause and possible solutions and referred me to an article by Alex Ashwood, “Poor suckling reflex”, which appeared on the Australian Brahman Breeders’ Association’s website.

According to the article, studies in the United States (US) suggest that as many as 30% of suckling problems in newborn calves are due to a lack of an instinctive ability to suckle. If not attended to immediately, these calves will succumb (mortalities, the article stated, can be greater than 50%). This condition is often referred to as dummy or silly calf syndrome or, more correctly, poor sucking reflex (PSR) syndrome.

Although other factors may contribute to a calf having poor sucking ability, such as temperature and rainfall, neonatal infections, prolonged and difficult calving, abnormal milk production and rejection by the dam, PSR is very specific and has been known to occur in various breeds including the Angus, Hereford, Chianina, and Brahman.

Dummy calves appear normal at calving, states the article, but they lack the instinct to purposefully suckle. Calves of any weight, size or sex can be affected and exposure to excessively cold, hot or wet conditions aggravates the condition. Calves often require more than two hours to stand up and initiate any suckling behaviour. During this period, these calves expend what little energy they have and their sensitivity to teat contact is low.

The article provides a seven-point checklist to identify PSR in a calf:

The following is an extract from the article and explains further problems that may present because of this syndrome.

If PSR calves have not suckled within six hours, they often need several experiences of forced suckling to locate a teat and show a sucking reflex. The calf becomes hypoglycaemic (low blood sugar) and, depending on weather conditions, either dehydrated or hypothermic. Neonatal infections may develop depending on the duration of colostrum deprivation and level of disease challenges.

The udder and teats of the cow may develop anatomical and mechanical problems, making the cow less tolerant of suckling. In the absence of suckling, the colostral immunoglobulin (Ig) levels and the calf’s ability to absorb it declines the longer the delay between birth and suckling.

Prevention of PSR in calves

Results from studies indicate that there is a genetic predisposition to this syndrome, verifying that the sire and dam are important factors. To lower the incidence of dummy calf syndrome in a breeding herd, beef producers should cull cows and sires that show a high incidence of the problem. Cows with poor udders and teat conformation, poor mothering ability and a history of neonatal losses should be culled.

Where there is evidence of PSR calves, assistance must be provided to minimise energy expenditure (walking and non-teat-seeking behaviour). Due to the obvious nature of the problem, the calf’s survival depends on artificial nursing (bottle feeding or stomach tubing), preferably with high-quality colostrum.

Colostrum is milk produced during the first few days after calving, which is reinforced with blood proteins, vitamins and Ig, sometimes called antibodies. Newborn calves are born with very low levels of Ig, which is critical to the proper functioning of the immune system. Colostrum with large amounts of Ig is the primary source of Ig for calves.

The digestive system of a newborn calf can only absorb large Ig molecules for about 24 hours after birth, so early feeding of colostrum is essential. During this period, however, the calf’s intestine can absorb other large molecules and bacteria that are absorbed into the calf’s system.

The amount of Ig in colostrum depends on several factors, including the exposure to disease, disease history and the age of the cow. That is, cows tend to produce Ig in response to pathogen (disease) challenges. Cows raised on a specific farm will produce colostrum with antibodies specific to the disease challenges on that farm.

Storage can also influence colostrum quality. Colostrum can be refrigerated for only about one week before quality (Ig concentrations) declines. Freezing is the best option for long-term storage of small amounts of colostrum. Colostrum may be frozen for up to one year without a significant decomposition of immunoglobulins.

Frozen colostrum in small bottles (1 to 2ℓ) is easily thawed in warm (not hot) water. Alternatively, it can be thawed out in a microwave using short periods of low power. Thawed colostrum should be ‘poured off’ into a second container to minimise hot spots and continuous heating. Colostrum should not be frozen and thawed more than once.

Insufficient serum Ig concentrations in calves are often due to the failure of passive transfer (FPT). Dummy calves are at particular risk of FPT due to insufficient intake of colostrum. Stomach tubing and/or bottle feeding is necessary with PSR calves.

It is preferable for the calf to suckle but if it cannot, stomach tubing, if done carefully, is the next best option. With stomach tubing it pays to get some coaching and to follow the instructions carefully. Preferably, the calf should be standing with its head in a comfortable position. A pliable tube is gently passed over the tongue, carefully checking the passage of the tube. If the calf begins to cough or vomit milk, stop immediately.

Stomach tubing is only a short-term option and should be replaced by foster rearing or bottle/bucket feeding at the earliest opportunity. Irrespective of the method of feeding, the amount of colostrum the newborn needs to achieve an acceptable transfer of passive immunity depends on several of the following factors:

When the calves are offered colostrum after six hours of age, the amount of colostrum should be increased to offset the decline in absorptive efficiency.

When good colostrum is available, feed as much as the calf will take as soon as possible and again twelve hours later. (The article suggests that you feed 2ℓ at a time, but some calves may not be able to ingest that much. If the colostrum is of inferior quality, the calf would need more – editor.)

If the dam or a foster cow is not available after feeding colostrum, fresh milk or a milk replacement should be fed. It is important to feed at a regular time using consistent products and methods (e.g. composition and temperature). It is also important not to overfeed (i.e. 2ℓ twice per day) as this leads to bacterial scours, ill-thrift and poor growth rates.

PSR calves managed correctly do not have physiological side effects or impairments, but it is not recommended that they are used or sold as breeding stock. The guidelines on colostrum feeding are relevant and applicable to orphaned and/or normal calves that have been separated from their dams.

The sucking reflex of dummy calves is lost if it is not stimulated. While poor nutrition can lead to weak calves, good feed management does not reduce the incidence of dummy calves. Poor conditions and abnormal environments accentuate the problem of dummy calves.

The elimination of the dummy calf, the article concluded, does not resolve the PSR problem – this requires the correction of the cause, i.e. sire and dam factors compounded by poor udder structure and low mothering ability. Avoid purchasing stock from breeders with low key performance indicators in reproduction and herd replacement management. – Izak Hofmeyr, Stockfarm

For enquiries or references, send an email to the author at izak@plaasmedia.co.za.

Starting your very own charcuterie