The volume of pig exports amounted to 745 054kg with an average price of R29,57/kg. Compared to the previous month, pork exports decreased by 7,5%. The price (R/kg) of exported pork decreased by 3,9%.

The volume of pork imports totalled 979 866kg with an average price of R38,18/kg. Compared to the previous month, pork imports increased by 40%. The price (R/kg) of imported pork decreased with 17,1%.

The number of pigs slaughtered to date totals 2 194 314, an increase of 0,5% compared to the same month last year. 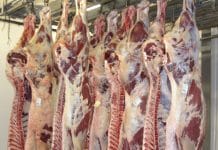