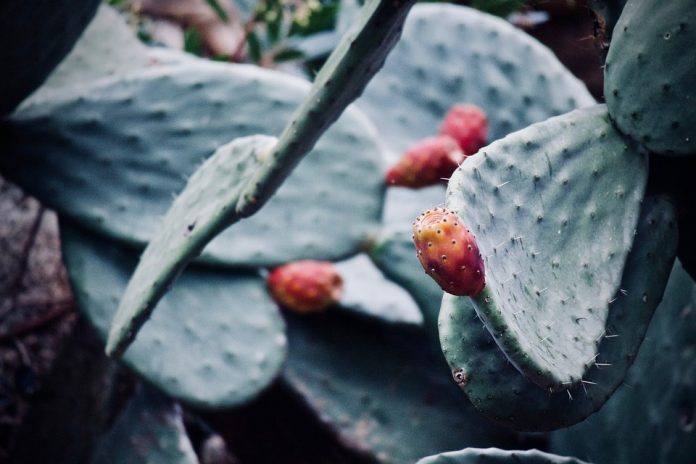 “I have been farming in the Roggeveld for 30 years now. In this time we have experienced an annual seasonal drought which, in some years, has been extensive,” says Chrisjan Jordaan of the farm Matjiesfontein near Sutherland. The farm has been in the hands of Jordaan family for the past 150 years. Chrisjan is the fourth generation on the farm.

He says: “During droughts it is important that your sheep maintain their condition, remain fertile and produce enough milk during the lambing season – all without emptying your bank account. I soon realised that I would have to plant something with which I could supplement my other feed sources, which would fit into the environment and which can be used economically as feed.”

As a result Chrisjan have been planting several prickly pear varieties for this purpose over the past three years. “Although still in its initial stages, I am already reaping the benefits. To date I have planted ten hectares under prickly pears that are used in different ways to serve as additional feed. In the first instance is serves as grazing, with my sheep grazing among the prickly pears, eating the leaves and fruit. In the second instance we pick the fruit and chop up the leaves as a fodder or dried feed component of the feed ration.

“I am still experimenting with various varieties. I have already planted twelve varieties.”

One of the characteristics that Chrisjan looks for in these varieties is sensitivity to frost. Some plants are prone to frost damage, especially if the leaves have already been eaten. “In the first year I experienced major losses due to frost damage, but this is decreasing every year as the plants adjust to the environment.”

Not a thorn in the flesh

Another important aspect is that he plants thornless varieties. According to Chrisjan, the newer varieties are almost thorn-free, the sheep find it delicious and none of his sheep have problems with sore mouths due to thorns.

Palatability is vital to ensure good grazing. “Some of the varieties are certainly more palatable to sheep than others. For example, I have planted Gymno Carpu and Robusta next to each other. The sheep first ate the Gymno Carpu to the ground before they started in on the Robusta.

“The last but equally important aspect is leaf and fruit yield. As the plants establish themselves and start to grow well, the yield also increases. Tests conducted by the University of the Free State indicated that one can expect a yield of around 50 tons of leaves and 25 tons of fruit per hectare annually from the sixth year onwards. These figures indicate a potentially huge additional feed source.”

The effect of the prickly pears on the sheep is reflected in good condition, ample milk and fertile animals. “The main difference, however, is that I am able to maintain their fertility much better during droughts.”

It is vital to understand the role of the prickly pears in the feed regime correctly. “Their purpose is to serve as an affordable and established supplement to the existing feed sources on the farm. I use a combination of natural Karoo shrub grazing, lucerne, old-man salt bush and the prickly pears as grazing.”

The prickly pears serve as a major aid during droughts, especially because the leaves and fruit contain high levels of moisture. The fruit and leaves both have nutritional value and can be used in silage.

“As a feed source I am therefore utilising the prickly pear plant in several ways. My long-term plan is that the prickly pears, together with the small grains that I plant, will become my complete concentrate source, making it unnecessary to buy additional concentrate. It will lower my input cost considerably.

“When it comes to licks and other supplements, finished products are too expensive. I buy and produce the raw materials and mix my own feed cost-effectively and successfully with a homemade mobile mixer.”

However, he emphasises that this doesn’t mean one should replace high-potential soil under lucerne with prickly pears. The value of this crop lies in its ability to offer good possibilities on low-potential soil that was previously under-utilised or not utilised at all.

The prickly pears are hardy and easy to grow. “Some of the fields which I previously had almost no use for, now produce a good yield. Prickly pears are also unique in the sense that they are able to draw a millimetre of water from the soil. Thus every drop of water is utilised.

“If you farm in the Karoo, you are farming in an arid region,” Chrisjan says. In some years the rain stays away too long and the lucerne dries out on the fields. This not only forced him to expand his fodder bank, but he also decided not to plant anything he cannot irrigate. The lucerne is irrigated from dams, but the prickly pears are under drip irrigation directly from wind pumps.

The right plan at the right time

“The key to farming success is ease of management. Allow yourself more control and plan at the right time.”

This includes everything from the selection of animals that can perform on your farm to using good systems and even maintaining the roads on your farm. “I established some 50km of roads on the farm so that I can get almost anywhere with the truck or motorbike. The farm is more accessible and I have better control, can manage challenges better and my workers are more productive.”

He says it is important that your enterprise never exceeds your ability. “You can easily end up in a never-ending vortex of debt that will mean the end of you. Be prepared for realistic challenges, work in tandem with nature and be practical in your planning in order to overcome challenges. As in any career a positive attitude and doing the basics right are key to success.” -Marike Brits, Stockfarm