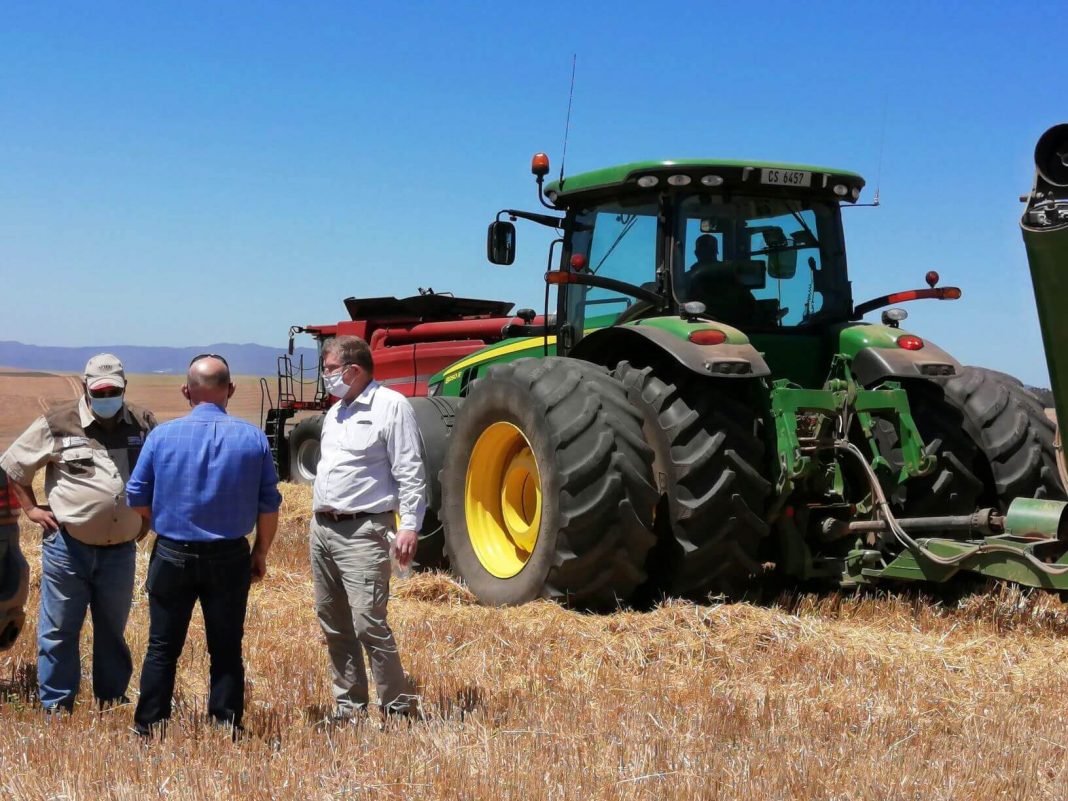 In light of the news that the Western Cape is expecting one of the largest winter grains and oilseeds crops in recent history, Western Cape minister of agriculture Dr Ivan Meyer, executive mayor of the Overberg District Municipality, Sakkie Franken, and mayor Paul Swart of the Cape Agulhas Municipality, recently visited the grain farming enterprise Agri Dwala in Napier in the Overberg region.

Commenting on the forecasted bumper year, Dr Meyer said: “The Western Cape Department of Agriculture expects a record grain harvest this season. We are grateful as this will increase the value of our agricultural production in the Western Cape, as well as revenue from the grain industry.”

Agri Dwala is wholly owned and operated by farmworkers turned farmers. The enterprise owns 580ha of land on which it farms wheat, barley, oats, canola, and lupines. Manager and shareholder Daniel Pieters says that after a few tough years they are excited by the prospect of a record yield.

“We have been keeping record of our grain harvest performance. All the indications are that we are going to have an exceptional year. Good yields and prices mean that we will be able to re-invest in our business.”

According to Western Cape Department of Agriculture economist, Louw Pienaar, the latest forecast from the Crop Estimates Committee, released on 28 October this year, estimates a Western Cape wheat harvest of one million tons.

According to Pienaar, this is the largest harvest in more than two decades, apart from a bumper harvest in 2016.

The national barley and canola harvest, the majority of which is produced in the Western Cape, will also exceed other recent harvests, with 520 000 tons of barley and 126 000 tons of canola expected.

“The excellent yields come because rain and weather conditions are favourable for winter grain production across both the Swartland and the Overberg regions. Aside from the good harvest, current prices are also at higher levels than those of the past few seasons, which will boost economic growth in rural areas,” Pienaar continues.

Dr Meyer concurs. “The Western Cape has seen long periods of drought in recent years. We should view the good news in the context of farmers having had to deal with successive years of drought. The expected record harvest will assist the economic recovery of the Western Cape.

Read our e-magazines in the safety of your home