Three different rodent species are usually encountered on a poultry farm. They are Rattus rattus or the roof rat, Rattus norvegicus or the brown or sewer rat, and Mus musculus or the house mouse.

Rats and mice are carriers of lice, mites, fleas and other parasites, and can transmit at least 50 possible diseases to chickens and humans, such as Newcastle disease or avian influenza – these diseases can even be transferred via the bait stations used to protect one’s farm.

Stockfarm asked two experts for advice on how to prevent these critters from partying among one’s chickens and what it involves to proactively manage an existing problem.

According to Lee Ashford at Scientific™ Supa-Kill, voluntary and involuntary movement can have a major influence on why rodents suddenly appear:

The correct bait in a bait station and a willing and trained staff member are essential to a productive pest control programme. If one of these steps were to fail, it will create a gap for rodents to take over. A bait station is designed to give the rodent a sense of safety while eating a lethal dose of poison.

“Regarding perimeter baiting, the bait station is basically a stopping place for the rodent to hide and rest before entering the chicken house. A poultry farm is usually surrounded by either crops or veld, and if there are other adjacent farms, it helps to find out when harvesting is scheduled in order to double up on the poison against the wall closest to the crop being harvested.”

Ashford adds that rodents need shelter when crops are harvested or the veld is burned, and the first point of contact between outside elements and the poultry house must therefore be a bait station. Once a rodent has eaten the poison, it will die in the poultry house if it continues on from the bait station.

Rodents that have already established a nest inside the house require more attention, and care must be taken as the poison is now placed near live chickens. Fortunately, there are various bait stations for different applications, such as cost-effective tunnel bait stations for augers and overhead beams, or bait stations that can house liquids.

Record-keeping is essential to indicate whether the bait station is being monitored for rodent activity. Bait stations must therefore be numbered and, in order to prevent disease transfer, kept in one place. It is important to clean the bait stations with soapy water, nothing stronger, as it will most likely deter a rodent from venturing into a bait station.

To implement disease control, live traps can be incorporated on a farm. Once a rodent has been caught, a veterinarian can test the rodent’s blood as well as its fleas. “Should a disease be present that can affect your chickens, you can add bait stations for faster control before an outbreak occurs,” conveys Ashford. Once the rodents have been removed from a poultry house, any remaining rodents will want to migrate to the next house, taking the diseases they may carry, along with them. It is therefore essential to place poison in the house once it is empty.

Snap traps can be used to identify the species and sex of the rats. This step is essential as placing poison high off the ground will have no effect if you are trying to combat sewer rats that do not like to climb. Should one catch mostly females in the snap trap, it may indicate a larger breeding pandemic.

If there are owls in the area, pulse baiting may be a better option to minimise the chances of secondary poisoning. This involves placing poison in an area for one day and then collecting the leftovers for the next four days, repeating the process a few times. By doing this, the rodents that have had a lethal dose on night one will not come back to feed again, and in three to four days’ time it will be too weak, or dead, to feed again, thus limiting the amount of poison in its system.

“Should they feel ill after consuming poison, rodents will warn other rodents by urinating on an item,” says Ashford. If you notice feeding for a day or two after having placed poison in a bait station and then some activity but no feeding, it probably means a rodent has urinated on the poison unintentionally and other rodents have taken the smell as a warning. It is very likely that they will start feeding again once you have cleaned the bait station and replaced it with new bait.”

A breadbasket for rodents

According to Heinrich Havemann, business manager at BASF South Africa, the attraction rodents have to poultry houses has nothing to do with the chickens, but rather with the chicken feed and water. They also eat eggs, prey on chicks at night if the hatchery is not secure, create stress for the flock which can result in lowered egg production, and contaminate feed, water and poultry houses with their droppings and urine.

“Rats and mice are especially likely to lurk around in the autumn and winter when food is harder to find. They have an amazing sense of smell and can jump almost 1m high and leap at least 1,2m from one obstacle to another. They are very good at gnawing through more or less anything, except metal,” says Havemann.

Prevention is better than cure

Chickens can eat rodent carcasses and have even been known to catch live mice. Therefore, restricting their access to rodents that may have ingested a rodenticide is crucial, as rodenticides can accumulate in the rodents, and if consumed by chickens may cause secondary poisoning. 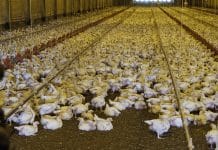 Mulching can be an absolute game-changer

Are evictions really the only way out?