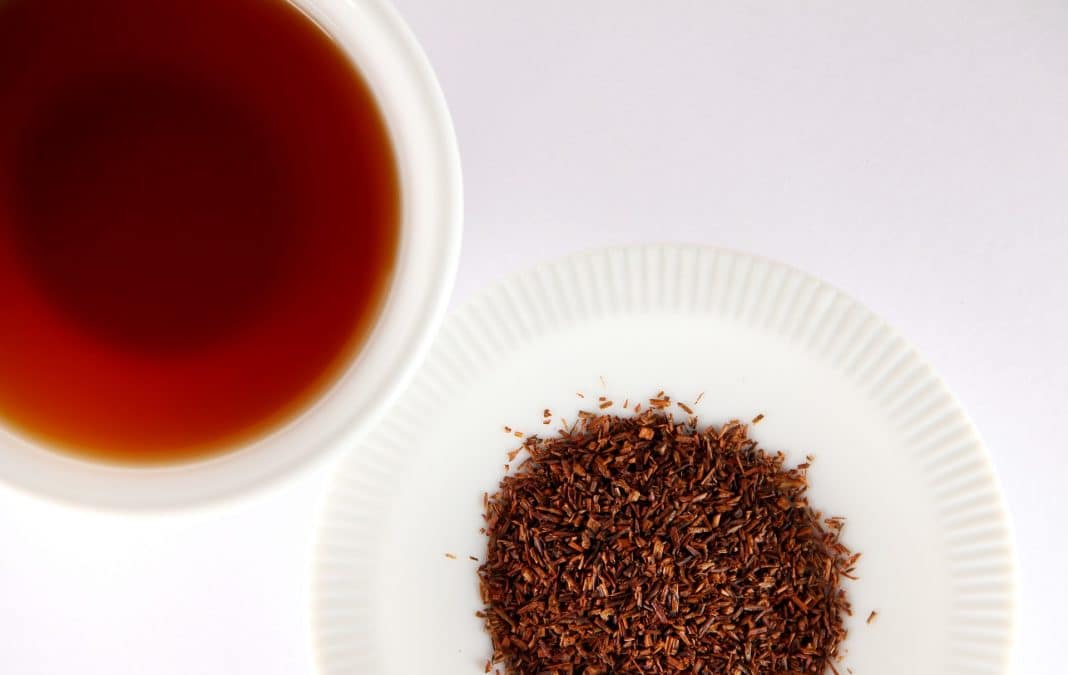 Rooibos (Aspalathus linearis) is an indigenous South African plant that only grows naturally in the Cederberg mountain range in the Western Cape. Rooibos tea does not contain caffeine and has low tannin levels compared to black tea or green tea. In the Clanwilliam region Rooibos has been prepared as a tea by the indigenous Khoisan people for about 300 years.

According to a European botanist, Carl Thunberg, who visited the Cape in 1772 to report on the rooibos plant, the Khoisan traditionally climbed the mountains and cut the fine, needle-like leaves from wild rooibos plants.

Harvesting and processing of this indigenous herb is done in much the same way today only with more advanced equipment.

Early Cape-Dutch settlers started drinking rooibos tea as a cheaper alternative to expensive black tea from Europe that had to be imported by ship. In 1904 Benjamin Ginsberg, a young Russian immigrant, often called the father of commercial Rooibos Tea, joined his father, a tea trader, on the farm Rondegat in the Clanwilliam district of the Cederberg. He quickly developed a fascination with the plant and is said to have been the first to cure the leaves of the Rooibos plant by fermentation in barrels.

He also pioneered the commercial trade of rooibos as a tea to local farmers, marketing it as “Mountain Tea”. It is therefore appropriate that the date chosen to celebrate this plant coincides with the birthday of Benjamin Ginsberg. The commercialisation of rooibos production only started in the 1930s when the method used for germinating the seeds for commercial use was discovered.

In 1930 botanist Dr Pieter Le Fras Nortier was the first to research the agricultural potential of rooibos. He discovered that once rooibos seeds were scarified, the inner-pod could easily be germinated for propagation. He introduced his revolutionary finding to the local farmers of the Clanwilliam area, thereby establishing the early beginnings of its now thriving rooibos industry.

Dr Le Fras Nortier also started researching the medicinal value of rooibos. Later, in 1968, Dr Annetjie Theron, a South African mother struggling with an allergic infant, did extensive research on rooibos and discovered that it soothed her baby’s colic. She published a book on her findings called “Allergies: An Amazing Discovery” that has contributed to the promotion of the health benefits of rooibos.

Today it is a well-known fact that rooibos has many health benefits. It is high in anti-oxidants that fights cancer, boosts the immune system and reduces aging. Rooibos extracts are therefore often used in health and beauty products. The extract is used in anything from face cream to diet supplements.

1995 Green rooibos was developed in by the Agricultural Research Council (Infruitec) in South Africa. Green rooibos is an unfermented or unoxidized form of this tea that is more demanding to produce which makes it more expensive than traditional rooibos. Its flavour is malty and slightly grassy unlike its red counterpart.

More recent rooibos innovations include the red espresso, the first tea espresso in the world, and wine that contains Rooibos as a preservative instead of sulphites.
Demand for rooibos has increased by nearly fifty percent in recent years, and continues to grow in Europe, Asian countries and the United States.

Attempts to grow rooibos naturally in the United States, Australia and China have all failed and is still produced only in South Africa. – Ursula Human, AgriOrbit

Bt maize: How to prevent resistance