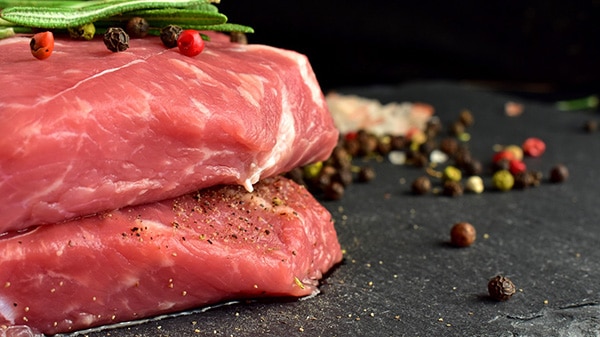 The third part of this series focused on the trade indicators and price trends for mutton and lamb. In this article, we will do the same for the beef market. In the first two parts of the series it was determined that the national supply of beef decreased over time while total demand increased. This should be kept in mind when the trade indicators and price trends are discussed in this article.

South Africa does not operate in isolation and domestic beef production forms part of the larger international market. Therefore, imports and exports should also be considered. Figure 1 illustrates the import and export quantities (ton) of beef for South Africa from 2016 to 2019.

It is evident from Figure 1 that the trade balance in terms of beef quantities is usually positive with exports outweighing imports. These quantities represent all beef (chilled, frozen, whole and half carcasses, bone-in and deboned cuts) but exclude offal.

Total import volumes from 2016 to 2019 equalled 54% of the total export volume. South Africa imported approximately 1 257 tons of beef per month, while it exported 2 620 tons on average. The annual average import quantity is approximately 15 086 tons, while exports added up to 31 439 tons per annum.

In terms of trade partners, most of the imported beef originated from Botswana, Namibia, Australia and New Zealand, while exports typically went to Kuwait, Jordan, United Arab Emirates, Mozambique, Eswatini, Qatar, the Netherlands and Egypt.

The interactive forces of supply and demand determine a product’s market price. Figure 2 presents both the nominal and real prices for beef. The nominal price is the shelf price, which usually increases year on year. The real price (inflation-adjusted price), however, is more important – it indicates whether the market price, irrespective of inflation, actually increased over time.

In terms of the nominal price it is expected that the price should increase year on year as it is driven by inflation. Yet the price sometimes decreases from one year to the next, as is clear from Figure 2. However, when we adjust the price for inflation and work with the real price, it is evident that it is much more volatile than the nominal price and goes through deeper cycles.

Consequently, although the shelf price of beef may increase from one year to the next, the real price can decrease in the same year. This puts the producer under financial pressure. Interestingly, the peaks in the real beef price in Figure 2 are approximately seven years apart.

The annual average in Figure 2 paints a picture of beef prices that were on an upward trend during the past few years. However, when the weekly price of A2 beef carcasses in South Africa is considered, Figure 3 shows a different picture in terms of the price trends.

The first thing that is evident from Figure 3 is that the A2 beef carcass price is more stable than the A2 lamb carcass price (see part 3 of the series). The price fluctuation within a year is also not as high as in the case of lamb. The most significant difference between the week with the lowest and highest price is R10/kg (2019).

Considering the carcass prices of the past four years, relatively good prices were realised in 2017. However, the weekly nominal prices in 2018 were lower than the 2017 prices for much of the year and the average annual nominal increase from 2017 to 2018 was positive (2%). Yet if one adjusts the prices for inflation, the real price was approximately 3% lower in 2018 than in 2017.

During 2019, carcass prices were lower than in 2018 and 2017. In nominal terms the price decreased by 5% from 2018 to 2019, while in real terms it decreased by approximately 10%. These decreases placed an enormous financial strain on producers as the cost of production inputs increased during the same time. Meanwhile the drought also forced production costs further upwards.

This year, good prices were expected in March when the price was higher than in 2018. However, the influence of COVID-19 was characterised by sharp price drops. The price only managed to recover and increase to above the 2017 and 2018 prices by week 39. The exceptionally low price during a large portion of the year will most probably cause the year-on-year average price difference from 2019 to 2020 to be negative once again.

The indexed prices for A2 beef carcasses in Figure 4 represent the annual price cycle over the past eight years. The highest price usually occurs in December as the demand for beef in South Africa is usually high over the Christmas holidays. During January and February, the prices are normally low due to the high supply of slaughter-ready cattle weaned during the previous September and October, and due to low demand.

The price then starts to increase towards the Easter holidays in April, before it slowly declines during winter. August and September prices tend to be higher again due to lower supply and higher demand, as the demand for premium cuts starts to increase with summer approaching.

South Africa is a nett exporter of beef. Still, the majority of exports do not go to high premium markets. Beef cattle producers went through a very rough patch the past few years, as there have been almost no nominal price increases since 2017, with the real price declining year on year. It seems that the last quarter of 2020 might bring better prices and we can only hope that this trend continuous in 2021. – Dr Frikkie Maré, Department of Agricultural Economics, University of the Free State

A look at sustainable farming trends in South Africa