The wine farm, Cederberg, has confirmed its commitment to sustainability with the installation of a solar energy plant. Situated in the Cederberg Nature Conservancy, the farm harvests 900 tons of grapes each year in a distinct terroir to make its sought-after signature ranges of wines.

This isolated, virus-free farm has water from mountain springs, a unique cold climate without coastal influences and five generations’ understanding of the land.

Cederberg was one of the first wine farms in South Africa to be awarded Champion Status by the World Wide Fund for Nature (WWF) in recognition of its commitment to regenerative farming practices. It is also the farm with the most unspoilt land of all WWF Champion-accredited wine farms. Of the 5 500ha property, only 85ha is under vine.

Wine farming is more energy-intensive than it may appear at face value. After grapes are harvested, their temperature must be reduced by between 15 and 16˚C before they can be processed. To lessen this, previously one needed to change the harvesting times. Now with the solar plant on the farm producing additional energy, the harvesting window can be extended. Naturally, wine cellars must also be temperature controlled throughout the year.

The move to solar is the farm’s most measurable initiative to reduce its carbon footprint to date. The 257,76 kWp solar power plant, which has been operating for six months, has cut the farm’s carbon footprint in half. Additionally, it has reduced the electricity used in the cellar and farm practices by 75%.

The solar system is grid tied, meaning that it is connected to the national electricity grid. This set-up was made possible through a collaboration among Cederberg Wines, New Southern Energy and Eskom. One of the many benefits of a grid-tied system is that when the solar system reaches a certain capacity, it can feed excess energy back into the grid. – Press release, Cederberg 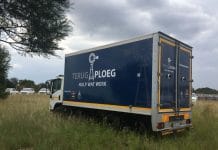