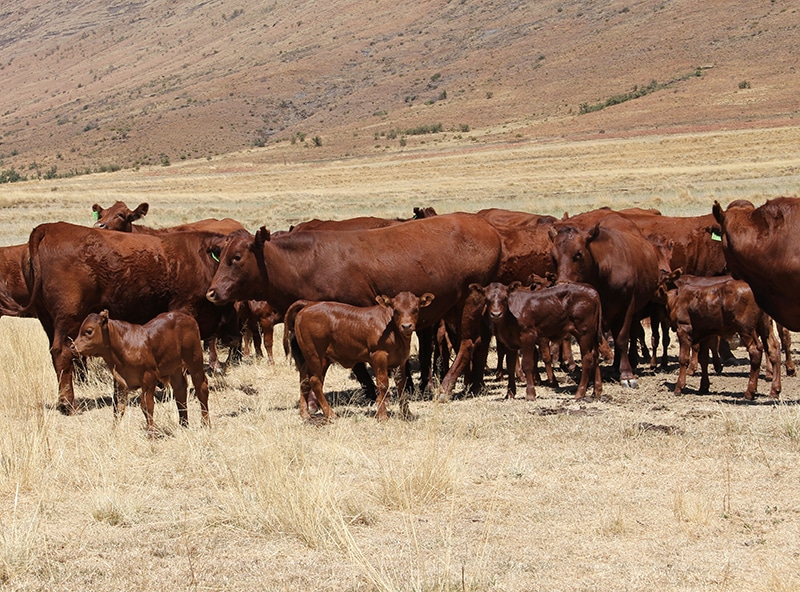 Artificial insemination (AI) offers tremendous benefits to the commercial cattle producer. And these benefits stretch far beyond the genetic progress that can be made. This is according to Peter Milton, a cattle production consultant from Port Elizabeth. The first advantage of AI, he says, is its cost-saving aspect.

“A transaction must make financial sense. When it comes to how much a commercial producer should pay for a bull, the golden rule is that the price per bull must be equal to the price of seven weaners. At a price of R32/kg live weight, and an average weight of 230kg per weaner, a producer should therefore pay no more than R51 520 for a bull,” Peter explains.

“In a herd of 100 cows a producer needs at least five bulls, if you add a spare bull to the equation. This means the value of his bulls will amount to R257 600. After that, he will probably have to buy a replacement bull every year.

“The price of a semen straw, on the other hand, should be around four to five times more than the per kilogram price of a weaner calf. This means four or five times R32. A realistic price for one straw is therefore between R128 and R160. At this price, a producer could inseminate 100 cows for three years and still not be close to paying the price of a bull.”

It is true, of course, that a livestock farmer occasionally needs bulls to mate with cows that did not fall pregnant following insemination. In a herd of 100 cows with a pregnancy rate of 60% through AI, you need two bulls to impregnate the 40 open cows as soon as possible. This means saving on the price of three bulls in the first year, after which you will never need to buy more than one bull per year.

The second and most obvious benefit of AI, he says, is having the best semen in the world at your disposal. Instead of buying those bulls that make economic sense, you will be able to progress much faster in terms of genetics if you stick to AI.

The key to successful AI, says Peter, is being able to inseminate the cow at exactly the right stage in her cycle. But very few producers have half an hour to spare every morning and evening to watch their cows in order to spot the ones that are in oestrus. That is why it is so convenient to synchronise your cows’ cycles, as you can determine the exact day and time when all your cows must be inseminated.

According to Dr Danie Odendaal of Veterinarian Network, a fixed-time synchronisation programme makes it possible to manipulate the exact day of ovulation in a cow.

The most basic method of controlling the oestrus cycle is with a prostaglandin injection. The veterinarian must examine all cows prior to the commencement of the synchronisation programme, as pregnant cows will abort if prostaglandin is administered. The injections must be obtained and used as prescribed by a veterinarian, otherwise their use in food-producing animals is illegal.

A prostaglandin injection has the same effect as the prostaglandin secreted by the uterus on day 16 of the cow’s cycle. This causes the corpus luteum to break down in the cows that have an active corpus luteum in the ovary at the time. These cows will show signs of oestrus over the next two to six days.

Oestrus can be further controlled by supplementing progesterone; this is done via an implant inserted into the vagina that secretes progesterone, just like the corpus luteum in the ovary. In this case, the progesterone phase is extended until all the animals in the herd are in this phase.

Progesterone supplementation begins approximately ten days before the mating season. The treatment is expected to stimulate up to 65% of cows that have no cyclic activity, to also show evidence of oestrus.

This is not only of great benefit to the animals that become pregnant via AI, explains Dr Odendaal, but also to those that fail to conceive. “After two oestrus cycles with follow-up bulls, the pregnancy rate will increase to 85%!

“In management terms the benefits are enormous, because a large number of your animals will be pregnant at the start of the breeding season. This means that most calves will be born early and will be between 10 and 15% heavier at weaning than calves born late in the season.”

Another advantage is that cows that calved late in the previous season can be resynchronised within 45 days of having calved. Their intercalving period (ICP) is therefore significantly shorter, allowing them to catch up to the cows that normally calve early.

According to Peter, it is essential that you adhere to the synchronisation protocol when synchronising your cows. The cows are treated with hormones over a ten-day period and will ovulate between 48 and 52 hours after the progesterone implant has been removed. It is therefore vital to plan your schedule in such a way that you are ready for AI when the time arrives. It is advisable to inseminate your heifers in the morning and the cows later that day.

Your veterinarian must also evaluate each cow’s internal reproductive organs beforehand using ultrasound to determine if they are cyclic and at what stage of the cycle they are. Cows that are not cyclic need to be treated separately and the reason why they are not cyclic – either too lean, too young or ill – should be determined.

Peter points out that some livestock farmers prefer not to add their follow-up bulls for the first cycle after insemination. Their reasoning is that cows that failed to fall pregnant will all reach oestrus in about three days, which might be too much for the follow-up bulls. During the next cycle, the cows will reach oestrus at different times and the bulls will have less trouble mating with them when they reach oestrus.

It is advisable, he says, to scan for pregnancy 60 days after the last cows came into oestrus. This will allow producers to separate and sell non-pregnant cows, and will lessen the burden of carrying them through the winter.

“It is vital that your cows experience as little stress as possible during early pregnancy, as stress can cause them to resorb the foetuses. So, do not make drastic changes to their ration and make sure they have access to enough clean water at all times.”

If you want your synchronisation to be successful, he concludes, you need to draw up a good project plan and stick to it as closely as possible. “Make sure you order the semen timeously, make appointments with your veterinarian or reproduction technologist at the right time, and abide by the prescribed synchronisation schedule.”

The importance of agrometeorological knowledge in agriculture

The role of organic matter in soil

An overview of global aquaculture