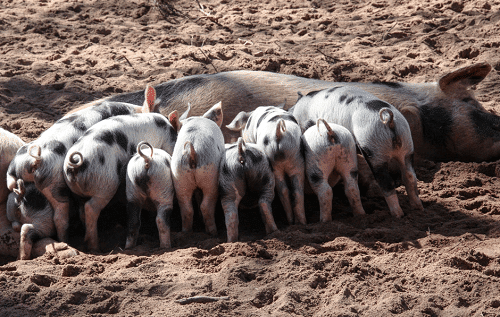 In April last year African swine fever (ASF) was detected in areas outside the official ASF control zone in South Africa. Up until 4 November a total of 19 outbreaks were reported in five of the country’s provinces: North West, Mpumalanga, Gauteng, the Free State and the Northern Cape.

Globally, the disease has spread on a massive scale since 2016. It was reported in China in August 2018, and in Mongolia, Vietnam and Cambodia in 2019.

By August last year five million pigs had already been culled in Asia to prevent the spread of the disease. It is therefore easy to see why ASF is a controlled disease.

What is African swine fever?

ASF is a deadly virus that affects domestic pigs. The disease does not affect humans. It is maintained in the wild by warthogs, bush pigs and the tampans (soft ticks) that feed on them, although they are unaffected by the disease.

How does the disease spread?

The virus can spread in the following ways:

There is currently no vaccine available. The best way of preventing the disease is to avoid infection by implementing good biosecurity measures.

Controlled area: The details of the ASF controlled area is contained in the Animal Diseases Regulations. The control zone in South Africa is depicted in Figure 1.

All domestic pigs in the controlled area must be kept in pig-proof camps, kraals or pens to prevent any contact with bush pigs, warthogs or wild pigs.

Domestic pigs, wild pigs, bush pigs and warthogs, as well as their products, may only be moved from, into, within or through the controlled area on the authority of a permit issued by the responsible state veterinarian. A permit is also required to hunt these animals in the controlled area.

General preventative measures: As with any other controlled disease, the responsible person, or any other person who knows of or suspects the presence of ASF, must immediately report it to the responsible state veterinarian.

Anything infectious or contaminated that is fed to pigs must be cooked beforehand for at least 60 minutes, or otherwise sterilised. This is a permanent and general requirement in order to prevent infections.

Infectious and contaminated things are detailed in Annexure 1 of the Regulations and include milk and dairy products, meat and meat products, organs, glands, viscera, eggs, and bone meal. Examples of contaminated things include animal bedding, meat cloths and material used for wrapping animal products, and fodder.

Measures applicable during an outbreak: All infected pigs, as well as contact pigs, must be quarantined; the farm will also be placed under quarantine. Infected and contact pigs must be destroyed under the supervision of an officer or authorised person.

In accordance with Section 11 of the Animal Diseases Act, 1984 (Act 35 of 1984) and Regulation 12, the responsible person must notify all neighbours of the presence of the disease as well as buyers who had bought animals from the producer in the preceding 30 days.

It is important to note that no person (other than a veterinarian or responsible technical officer) may make an incision in the carcass of an animal that was infected or suspected to be infected with ASF.

Furthermore, nobody may remove such a carcass from the land on which the animal had died. Such a carcass must be disposed of in one of two ways (subject to the by-laws of the local authority):

All the general requirements for quarantine situations, such as keeping detailed records and registers and disinfecting areas and equipment, is also applicable.

When necessary, additional control measures can be implemented. During the outbreak in South Africa, the sale of pigs at auctions was suspended in the affected provinces.

The effect of an ASF outbreak can be devastating for individual farmers as well as for the industry. There is no vaccine available to prevent the disease. The only control that producers have over the disease is to implement strict biosecurity measures and to follow the control measures prescribed in the Act and Regulations.