Home Agri News The geopolitics of palm oil and deforestation 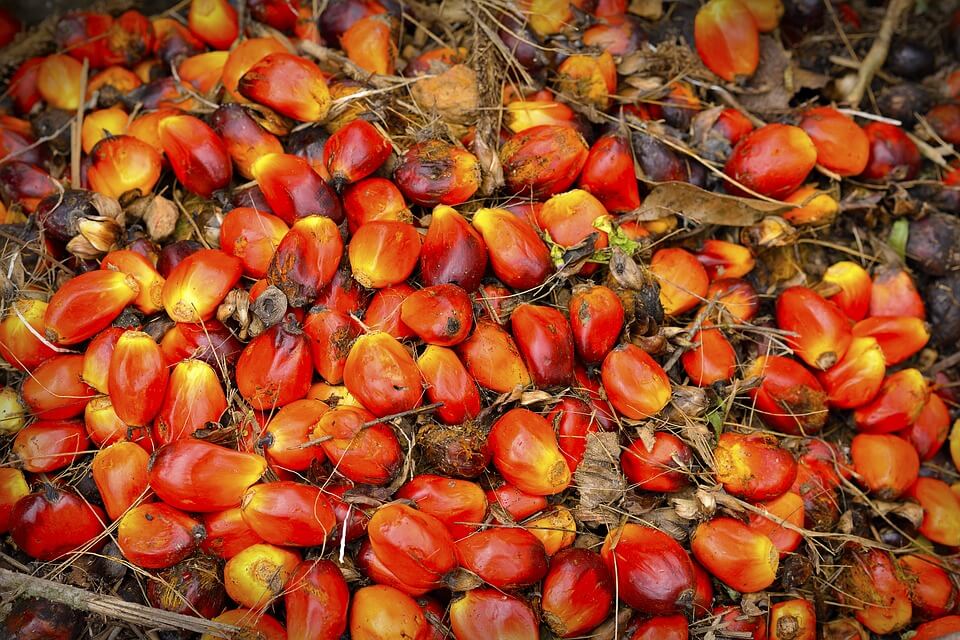 This article is republished from The Conversation under a Creative Commons license. Click here to read the original article.

Like other vegetable and animal fats, palm oil follows food-supply trends that have been well documented since the 18th century. For example, in France the calorie intake per capita peaked around 1900 and has since been stable.

While the total caloric intake in France has levelled off, the proportion of carbohydrates has constantly decreased while that of fats has risen. The two converged between 1980 and 2000. In other words, once the French society provided enough food for all, the average diet progressively increased its share of fats, up to a maximum.

Food security on the rise

Many countries are still far from achieving the same food abundance that countries like France have, but food security increased in the last six decades worldwide, even in the least-developed countries. Since 1950, the FAO has compiled detailed data showing that the same phenomenon occurs everywhere: intake of food and fats per capita increases, and hunger progressively decreases.

Despite a variety of trajectories across countries, all of them see an increase of fats consumption when poverty decreases and urbanisation increases.

At the same time, another trend has taken place: vegetable fats are progressively replacing animal fats. For the developed countries, the consumption of animal fats per capita reached its peak in the 1980s and started to decline. Conversely, consumption of vegetable fats continued to rise strongly during that period. While North American and European vegetable-oil consumption is now stable, all the other regions of the world are still far from European levels.

On average, these regions consume proportionally more vegetable than animal fats. They also have strong population growth, and when they reach the levels of vegetable-oil consumption seen in Europe – perhaps by 2050 – the global demand will be around 250 to 350 million tons per year more than the 170 to 180 million tons consumed currently.

This leads to geo-strategic questions: which vegetable oils will be produced to feed the world, who will sell them, who will control their production, and where will there be enough land to grow them?

Four major vegetable oils constitute more than 85% of the world consumption. Sunflowers, rapeseed and soybeans were originally grown in temperate countries, but a rising share of soybeans is now produced in Brazil thanks to genetically improved varieties. Oil palms grow only under humid tropical conditions, and produce five to eight times more oil per hectare than the other crops.

In other words, soya bean, sunflower and rapeseed demand five to eight times more land than oil palm trees to produce one ton of oil.

In addition to their exceptional productivity, oil palm trees also demand much less work and production inputs per unit than other oil crops. Therefore palm oil is by far the cheapest oil to produce.

Oil palm trees are also one of the most profitable crops for farmers and are thus one of the success stories for fighting rural poverty in tropical countries. In humid Africa, oil palms are one of the last safety nets for the poorest. Indonesia and Malaysia produce more than 80% of the world’s palm oil: in both countries palm oil development was and is still responsible for the livelihoods of millions of smallholders.

These major oils also have different characteristics for industrial uses. Palm oil is the only one that is naturally hydrogenated and structurally stable at ambient temperatures. The other oils must be artificially hydrogenated to achieve similar properties, which is costly and produces harmful trans-fatty acids. Still, all oils have their own advantages and drawbacks for human health, with none being better than the others.

Because of the productive advantages of palm oil, its market share has grown steadily over the last decades, and surpassed other vegetable oils. It is now the leading vegetable oil of the world.

Land grabbing or feeding the planet?

All the agribusiness corporations are perfectly aware of the properties of the respective oils, and of the world demographic trends. They bet on growing markets, with the rise of the middle class in developing and emerging regions. They especially eye the fastest-growing urban clusters of the world, including China, India, Nigeria, Pakistan, Indonesia, Bangladesh and the Philippines.

To supply to global markets, agribusiness corporations as well as some governments are racing to secure land by direct acquisition or indirectly through political intervention. Building up ‘land banks’ is the game, and getting the best position to feed the future planet is the stake.

The biggest agribusiness corporations, known as the ‘ABCDs’, are headquartered in western countries and are highly influential around the world. For example, they allegedly control 75% to 90% of the world grain market. Three of the ABCDs have their headquarters in the United States, which not coincidentally has the largest land bank outside its borders – more than 7 million hectares.

Smaller but rising agribusiness corporations from Southeast Asia, are also in the competition. As a result, Malaysia has the second largest land bank, with more than three million hectares.

There is a marked specialisation between these multinationals for vegetable oils. The ABCDs directly or indirectly control the production of soybean, rapeseed, and sunflower oil. The smaller Southeast Asia multinationals such as Wilmar, Olam, Sinar Mas and Sime Darby and others control the production of palm oil. As a result, there is a global competition in the vegetable oil market, with, on one side, the dominating western agribusinesses, and on the other side, the smaller agribusinesses from Southeast Asia who are progressively taking a bigger share of the global pie.

The main oil crops of the European Union are rapeseed and sunflower. Rapeseed is dominant especially in France, Germany and Poland. Among big producers of biodiesel, France and Germany are the only countries to use rapeseed as main feedstocks. It is much more expensive than palm oil and soybean oil, but rapeseed plays an important role in the agricultural politics of the two countries.

In 2003, France and Germany established fiscal policies promoting biodiesel. It immediately boosted European consumption of domestic rapeseed, but it also pushed up imports of palm oil, which increased by 3,1% for every 1% rise in the price of rapeseed oil. After 2008, even though these fiscal tools were ended, industrial consumers continued importing palm oil. Palm oil had become, and remains, a formidable competitor for the European rapeseed oil.

More recently, the United States started a trade war with China which imposed tariffs on US soya beans in 2018. That year, US soya bean exports to China dropped by 98%. At the same time, the US trade diplomacy managed to convince Europe to increase its imports of soya bean by nearly 250%. Most of the soybean imported into Europe is used for animal feed, producing oil as by-product: it is used as biodiesel at 98%. This added volume of cheap oil for biodiesel is another competition for European rapeseed.

In early 2019 the EU submitted an act targeting vegetable oils that cause ILUC risks and deforestation. The technicalities of this act are still debated among experts, but in practice the result will be a ban of palm oil. The main producers of palm oil, Indonesia and Malaysia, were understandably infuriated by this move.

For example, in Malaysia the major phase of deforestation occurred for the development of rubber estates, before the 1980s. Almost all of the rubber plantations were later replaced by palm plantations.

Some palm plantations were established in lands that were previously forested, but the real share of deforestation caused by palm oil plantations peaked in the 1990s and has decreased consistently since. It is now almost non-existent in Malaysia (below 1%). In Indonesia, the peak was between 2000 and 2008, and has now decreased to 5%.

The consumer is king

We know that consumers around the world will eventually demand around 250 to 350 million tons per year more vegetable oil than today. Soya bean development in Brazil and palm plantation development everywhere else will continue because the main demand is not in the countries having interests in opposing their development. Without palm oil, the future demand for vegetable oils would require cultivation land areas almost as large as the Australian continent.

For the benefit of all, the key is to prevent future deforestation, not to ban palm oil. It is imperative to improve the productivity and sustainability of palm plantations, enabling them to produce more with the same area. The real challenge is to create enough value from both agricultural and forest landscapes, to encourage local societies to keep their forests rather than to convert them into agriculture. – The Conversation