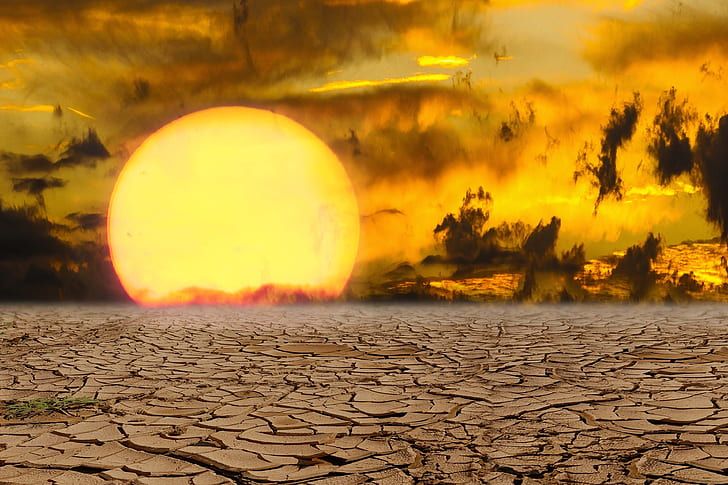 A report released by the United Nations (UN) Intergovernmental Panel on Climate Change (IPCC) has found that if the world continues to warm at its current rate, global temperatures will rise by 1,5°C between 2030 and 2052. This will have catastrophic effects on water scarcity, global food production, and almost entirely wipe out global coral reef systems.

For Africa and sub-Saharan Africa, the findings of the report are especially damning. Without immediate global cuts in carbon dioxide emissions, average temperatures in Africa will rise more than 2°C above pre-industrial levels by 2050. By this time, heat extremes never experienced before by humans in this part of the world could affect 15% of sub-Saharan Africa’s land area in the hot season, causing deaths and threatening farmers’ ability to grow crops.

The report is the result of the work of 91 dedicated lead authors and review editors from 40 countries, and the inputs of 133 contributing authors. This group assessed more than 6 000 scientific publications on climate change and climate change mitigation strategies.

Speaking after the report was approved in Incheon, South Korea, on Monday, former UN secretary general, Ban Ki-moon said: “Climate change is a global challenge demanding global solutions. Climate change respects no borders; our actions must transcend all frontiers. Equity, inclusivity and cooperation must underpin our collective response to meet the 1,5° target, with states acting in the same spirit that led to the Paris Agreement and the Sustainable Development Goals (SDGs).”

The report found that pledges by governments over the last three years are not enough to keep warming below 1,5°C, even with ambitious and very challenging efforts after 2030.

Although the report found that this is not impossible, it will require unprecedented transitions in all aspects of society.

Limiting global warming to 1,5°C implies reducing emissions of carbon dioxide by about 45% by 2030, compared to 2010 levels. This would require rapid and deep emission reductions in all sectors as well as the use of a wide range of technologies such as removing carbon dioxide from the atmosphere. Methods for doing this include planting trees, bioenergy combined with carbon dioxide capture and storage, and changed land management.

Key findings of the report:

Impacts of a 1,5°C increase on the African continent

Impacts of a 1,5°C rise in average global temperatures

The amount of freshwater available in rivers and lakes could decrease by 9% in the Mediterranean, 10% in Australia, and 7% in north-east Brazil as a result of a 1,5°C temperature rise. Glaciers in the high mountains of Asia play an important role in the water supply of millions of people living downstream. Approximately 800 million people are at least partly dependent on meltwater from these glaciers. In a world where temperatures are limited to 1,5°C by the end of the century, about a third of the ice stored in these glaciers would be lost.

Between 2014 and 2017, 21 of the 29 reefs listed as World Heritage Sites suffered from heat stress as a result of rising ocean temperatures. In a scenario where temperatures rise 1,5 °C by the end of the century, nine out of ten coral reefs are at risk from severe degradation from 2050 onwards. This declines to 70% by 2100, meaning that some coral reefs have a chance of survival. At the moment, coral reefs provide about US$30 billion annually to the world economy, in coastal protection, building materials, fisheries and tourism.

Rising temperatures, drought and unstable weather patterns have serious implications for global food production. Every degree of global temperature rise reduces global yields of wheat by 6,0%, rice by 3,2%, maize by 7,4%, and soybean by 3,1%. Some regions are more affected than others – for example in West Africa, wheat yields could fall by up to 25% if temperatures rise 1,5°C. Fishing will also be affected. Every year, about 82 million tons of fish are caught in the sea. For every degree of warming, this could decrease by 3 million tons. This may be an underestimate, as it doesn’t take into account the potential impact of coral reef collapse, ocean acidification or overfishing on fish populations.

Climate change causes sea level rise for two reasons: first, water expands as it warms and, second, melting ice sheets add water to the seas. Approximately 46 million people currently live in areas that are at risk of permanent inundation from sea level rise if temperatures rise by 1,5°C, equivalent to about 70% of the number of people currently displaced from their homes globally by war, instability or human rights violations. About half of this at-risk population is in China, Vietnam or Japan. – Press release